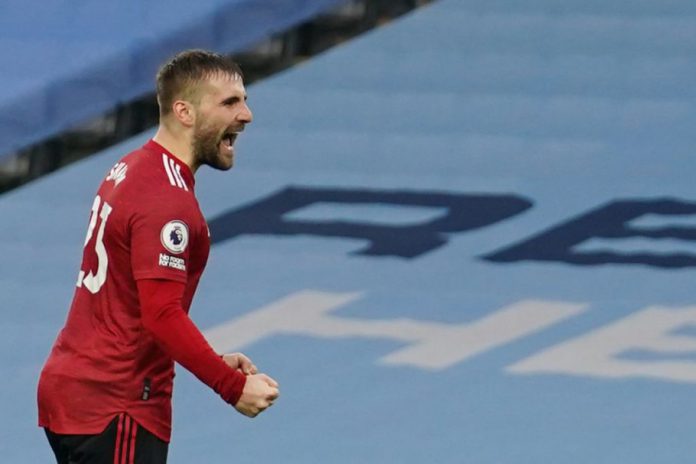 The two sides, of course, headed into the meeting at the Etihad in very contrasting form.

Man City were looking to make it 22 wins in a row across all competitions.

Man United, on the other hand, had won just one of their last five league outings, whilst having failed to score a single goal in any of their last three in all competitions.

Despite this, though, it was the Red Devils who went on to take the lead on Sunday.

Gabriel Jesus brought down Antony Martial in the City box less than two minutes into the tie. Bruno Fernandes then stepped up to convert the ensuing spot-kick:

And though City did go on to dominate the first-half following the opener, the Citizens were unable to find a reply before the interval.

Pep Guardiola’s men then started the second-half fairly well, too, with Rodri having rattled the bar 47 minutes in.

Nevertheless, though, it was the visitors who soon bagged the decisive second goal of the day.

Luke Shaw picked up the ball in the City box, before squeezing a low effort through three defenders and past Ederson:

As well as helping to bring an end to Man City’s 21-game winning run, Shaw’s goal at the Etihad rounded out yet another starring display from the full-back, who has been one of United’s key performers over the last couple of months.

It also meant that the Englishman has now notched 5 goal contributions in his last seven outings for the Manchester powerhouse:

In his last 7 PL games, Luke Shaw has been directly involved in 5 goals [4A 1G].

And that’s the most important of the lot. pic.twitter.com/yfLIk9LVri

As such, with the latest set of international friendlies taking place later this month, the 25-year-old has most certainly made a case that he should be handed an England call-up for the first time since 2018.

Five Egyptians appear on Forbes’ 2021 ‘Richest People in the World’...