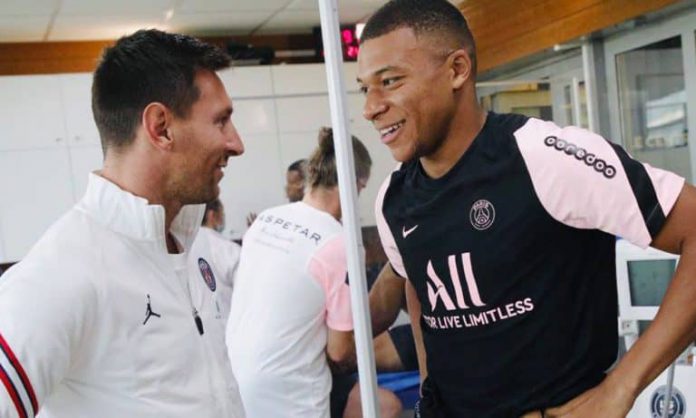 Paris Saint-Germain is starting to find their feet with their newfound strike force, and Kylian Mbappe believes he knows how the team should line up.

Les Parisiens extended their league at the top of the Ligue 1 with a comfortably 5-1 victory away at Lille on Sunday night.

Unlikely goalscorer, Danilo Pereira, scored a brace, with Presnel Kimpembe, Mbappe and Lionel Messi all getting themselves on the scoresheet in the impressive rout of the current titleholders.

After a fairly underwhelming start to the season, manager Mauricio Pochettino appears to be starting to get to grips with his star-studded squad, which will be music to the ears of those at the very top of the club who have aspirations of winning the Champions League this season.

Mbappe believes that he might know the best way for his side to line up, telling Amazon Prime after Sunday’s win: “It’s better when Leo is in the middle? Yes, but I’m not the coach. Leo is a player who needs to be on the ball, to feel the game and the match to be involved. I think it’s a good position for him, he’s free, and he can move around and take off.

“Me, I can play everywhere. I started in the middle, then on the right and now on the left but I still have a certain freedom in my movements.”

However, the Frenchman then made a very clear point that Pochettino needs to ensure that he plans for the return of Neymar, who is currently sidelined with an injury.

Former Manchester United forward Angel di Maria played in the absence of the Brazilian, though he was substituted at halftime to make way for Julian Draxler.

Mbappe continued: “ We are fine like this but we’ll have to make room for Neymar, because he’s an important player who changes our team. We’ll see what happens when he comes back, and we hope he comes back as soon as possible.”

Getting the very best out of seven-time Ballon d’Or winner Messi seems to be the priority at Les Parc des Princes considering the slow start the Argentine has made in the league since leaving boyhood club Barcelona in the summer.

The 34-year-old has scored twice and assisted six in 13 appearances so far this season, with some of his performances falling well below par.

However, Messi looked back to his usual self against Lille, linking up well with his teammates and taking on defenders at any available opportunity. PSG take on Rennes on Friday in the league before a crunching Champions League tie against Real Madrid next week.