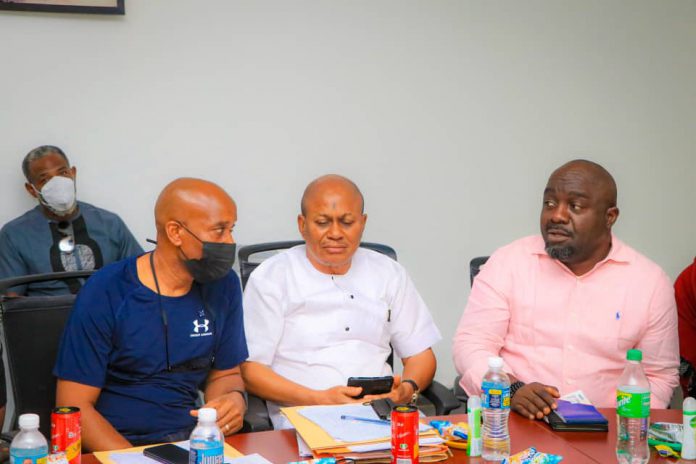 The organisation of this year’s 21st National Sports Festival commenced in earnest Monday with the inaugural meeting of the Local Organising Committee (LOC), in Asaba, the state capital.

The meeting presided over by Chief Patrick Ukah, Secretary to the state government and Chief Tonobok Okowa, the Executive Chairman, Delta State Sports Commission, as co-chairmen of the 17-member body was however held behind closed doors.

It was gathered that the meeting was exploratory and to set the template for a successful fiesta which Governor Ifeanyi Okowa had told the sporting fraternity will be the best ever to be staged.

The biennial feast will hold between November 4 and 13, 2022. The parley also had in attendance Chief Solomon Ogba, who is the adviser to the LOC.

Other attendees include: Charles Aniagwu, Hon Commissioner of Information; Chief Victor Onogagamue, the immediate past DG, sports commission, Chiefs Ernest Juweto and Chinoye Daphe-Aliyu, members of the sports commission board.

The membership which cuts across a broad spectrum of the sporting family also have Bukola Olopade, a former commissioner for sports in Ogun state, Ademola Are, a retired director, federal ministry of youth and sports development and Steve Onyeacholam, among others.

Light rain expected in parts of Western Cape on Tuesday

We will prepare athletes for next Olympics – Onikeku