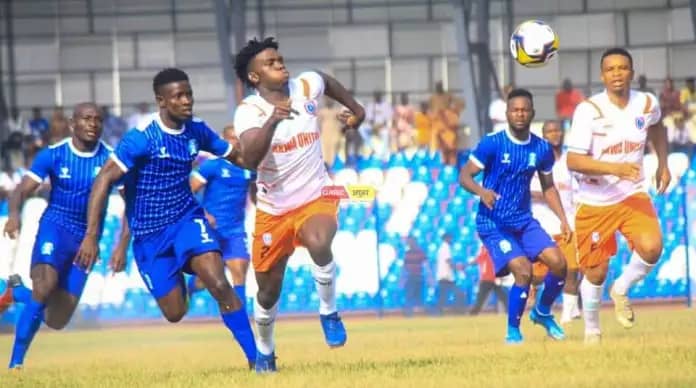 The remodelled Lekan Salami Stadium, playing host to its first major football clash after it was unveilled in September, was filled to capacity as supporters and fans of the Oluyole Warriors, trooped out in large numbers to cheer their team up, in the Nigeria Professional Football League (NPFL) matchday two encounter.
With Laide Okanlawon, who came in for injured Dare Dede in the matchday one tie against Gombe United, retaining his place in between the sticks, skipper Omololu Waheed, Isiaka Mutiu, Amodu Nurudeen and Bafan Augustine, kept their places at the rear, same as the duo of Gafar Olafimihan and Olatunji Dare, Ebenezer Odeyemi and Kehinde Fadipe made the starting line up.

The league defending champions, who came into rhe game as soccer pundits favourites, expectedly showed the stuff they were made of, displaying the real stuff of a champion, especially in the midfield, where they enjoyed more possessions.

However, they met a tough opposition in the hard fighting Ibadan soccer lords, who had more goal scoring chances, particularly in the second half of the game.
The coach Kenedy Boboye tutored Promise Keepers, had gone ahead in the 29th minute when they run down the 3SC defense before Seth Mayi’s pass, located an unmarked Uttibe Archibong, who effortesly slammed the ball past Laide Okanlawon for the opening goal.

Shooting Stars made efforts to grab the equaliser with Gafar Olafimihan and Ebenezer Odeyemi, who was the visitors’tormentor in chief, spearheading the attack, but the league holders, who also tried to increase the tally, held on to keep the scoreline 1-0 at half time.
The second half saw the 3SC bench bringing in Wasiu Alalade and Malomo Taofeeq for Kehinde Fadipe and Chinedu Enuademu and the substitutions brought life into the Waheed Omololu led 3SC as they pressed for the leveller.
With time running out, the duo of Ayo Adejubu and Akilu Mohammed were called to duty, to replace the workaholic Ebenezer Odeyemi and Dare Olatunji.

This eventually paid off in the 90th minute as Adejubu made his introduction count, slotting in the all important face saving equalizer, as GE rolled the ball past a stranded goalkeeper Adeyinka Adeyemi, after he was put through by Olafimihan.
The well deserved equalizer sent the crowd into wild jubilation as referee Faisal Inuwa from Bauchi State ended the contest, few minutes after.
Next assignment for the Oluyole Warriors, is a trip to Makurdi, the Benue State capital, for a midweek clash against Lobi Stars.

Level 2 warning for thunderstorms, hail and heavy rain issued in...

Countries which chose Covishield fared better than those that took mRNA...