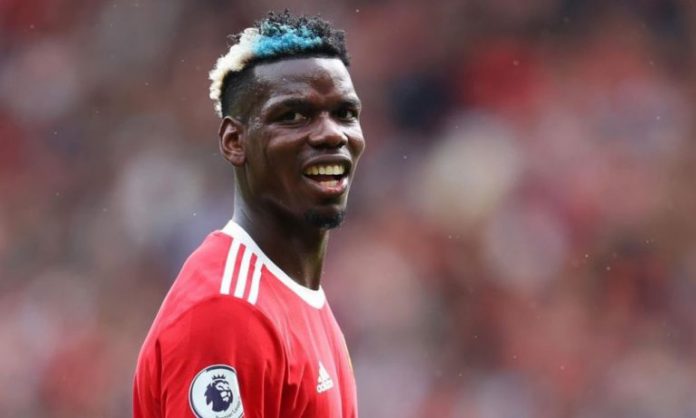 Paul Pogba is set to return to action for Manchester United after the winter break next month, interim manager Ralf Rangnick has confirmed.

Pogba hasn’t played for United since early November after picking up a thigh injury on international duty for France. He was initially expected back at the start of this month but that has been delayed by at least four weeks.

The 28-year-old returned to training at Carrington on Monday and posted a picture of himself with Cristiano Ronaldo, Marcus Rashford, Phil Jones, Donny van de Beek and Luke Shaw.

Rangnick, who previously said that he disagreed with Pogba rehabbing the injury in Dubai rather than Carrington, admitted that he was impressed by the player’s performance levels in training.

He said: ‘Pogba had his first day of training with the whole group yesterday and showed what an extraordinary player he could be.
‘He will not be available for two games (against Brentford and West Ham) this week, but hopefully after the international break when we have a cup game against Middlesbrough and an away game against Burnley I think he could be an option.’

However, Rangnick was reluctant to be drawn on Pogba’s contract situation, with the World Cup winner just five months away from being able to walk away from United for nothing for the second time in his career.
He added: ‘I don’t know. I cannot answer because it’s not me dealing with this. I’m not negotiating future contracts with players.

‘What can you see from the very first day in training, he was physically and mentally present. What I saw was very promising for the future and I’m very much looking forward to having him available in two weeks’ time. After the international break, I think he will be a serious candidate for the first XI.’

DPP to appeal court’s decision to release Kenyan wanted in US...