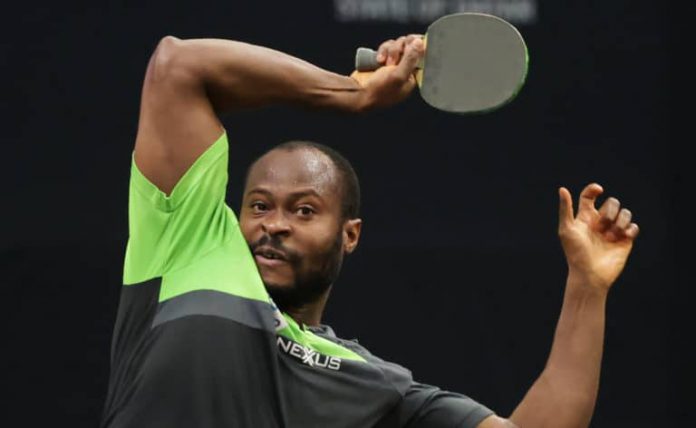 Just as it was predicted after his semifinal berth at the just concluded WTT Star Contender Doha in Qatar, Quadri Aruna gained two steps up the world ranking to occupy 12th place in the Men’s rating following yesterday’s official release of Week 14 of the ITTF Table Tennis World Rankings.

Being the first African to reach the top 11 in the world, Aruna’s good run in Doha fetched him massive ranking points to rise from the 14th spot to 12 in the latest world ranking.

The Nigerian overtook China’s Wang Chuqin and Germany’s Patrick Franziska to be among the top 12 players in the world.

Egyptian Omar Assar’s inactiveness may have caused his static in the ranking as the 2021 African champion remains world number 27 while his veteran compatriot Ahmed Saleh remains in the 49th spot. Senegal’s Ibrahima Diaw occupies 57th place while Olajide Omotayo dropped to 89 in the ranking.

In the women’s ranking, China’s Chen Meng remains the world’s best while Egypt’s Dina Meshref holds on tight to the top spot in Africa as the six-time African champion dropped to 40th in the latest ranking while her compatriot Yousra Helmy also dropped to 80th in the ranking while Nigeria’s Offiong Edem also slide to 89th in the rating to become the third-best in the continent.
Meanwhile, Also, China’s Fan Zhendong remains the best player in the world and has continued to hold on to the top echelon of the rating.

March will be a month to remember for Andrej Gacina. The Croatian veteran kicked it off by making the round of 32 at the Singapore Smash, going down to Chinese Taipei’s Lin Yun-Ju. But then at the Star Contender Doha, only his second event of 2022, he scored himself his first-ever WTT title with a win over South Korea’s Lim Jonghoon.

The 35-year-old’s hit list along the way included notable names such as Sweden’s Truls Moregard, Hong Kong’s Wong Chun Ting, and China’s Xue Fei. For a stellar month, Gacina moves up 15 places and is knocking on the door of a spot in the Top-30.

Minifootball AFCON 2021: “Be Patient With Us” – Coach Urges Nigerians...