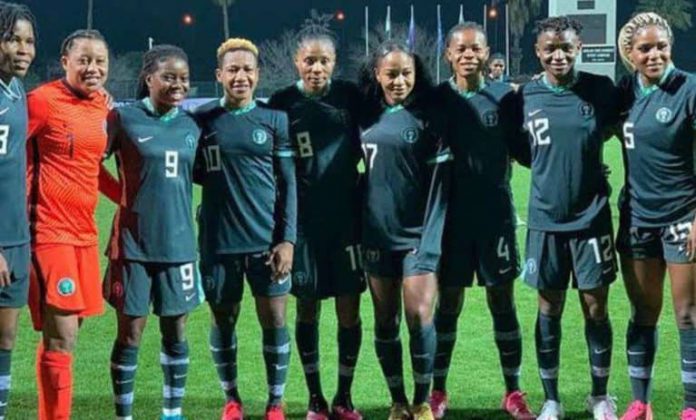 Super Falcons are confident of a better outing against Olympic Champions Canada when both teams square up in the second of their two-match bouquet in the North American country on Monday.

Two second half goals by Jessie Fleming (50th minute) and Vanessa Gilles (72nd minute) earned the world’s sixth –ranked team victory over the African champions in their first encounter in Vancouver on Friday (Saturday morning in Nigeria). However, Coach Randy Waldrum prosecuted that game with only 14 outfield players, most of who arrived on the eve of the match due to late issuance of visa from their respective bases.

They held on tenaciously in the first 45 minutes but fatigue and injuries saw goalkeeper, Chiamaka Nnadozie, defender and skipper, Onome Ebi and forward, Uchenna Kanu stretchered off at different times during the game. Midfielder Rita Chikwelu also had to be substituted.

However, Nigeria would be able to offer greater tenacity in Monday night’s duel as injured players would have recovered, there would have been more training sessions for greater bonding and understanding, and there is the added impetus offered by the arrival of barnstorming forward Francisca Ordega in Canada on Sunday.

The tie encounter will take place at the Starlight Stadium, and will commence at 7.30pm Canada time (3.30am Tuesday in Nigeria).

The two-match tour is part of the NFF’s general plan to prepare the Falcons adequately for the 12th Women Africa Cup of Nations finals taking place in Morocco 2nd – 23rd July this year, at which Africa’s four flag-bearers at next year’s FIFA Women’s World Cup finals in Australia/New Zealand will emerge.

Racist behaviour in Buffalo, Stellenbosch have the same roots – Ahmed...

Video: Cristiano Ronaldo & co. star as Juventus unveil ‘All or...