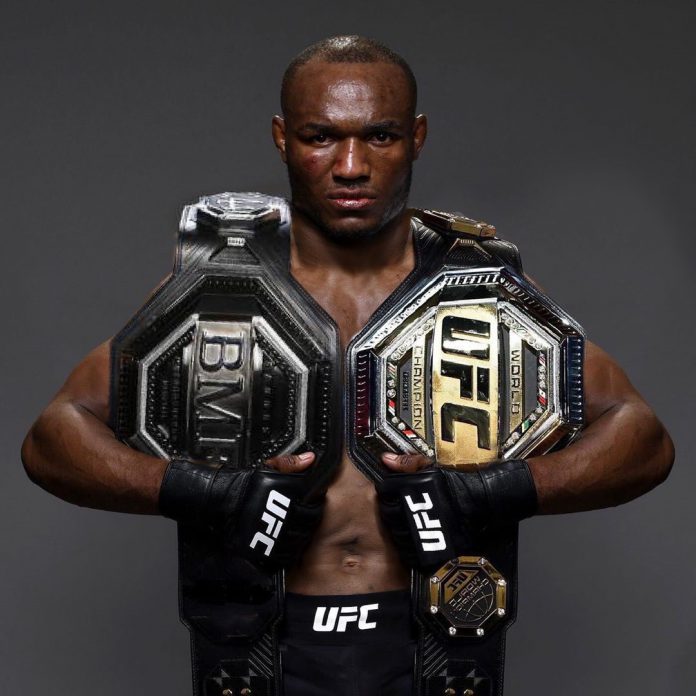 In a move aimed at honouring reigning Nigerian-born welterweight champion, Kamaru Usman and other African champions, the Ultimate Fighting Championship (UFC) is set to stage the 2022 championship fight in Africa.

Usman at the weekend proved once again to be a nightmare to Jorge Masvidal as the Auchi, Edo State-born Usman knocked his opponent to maintain his record at 13 wins and zero losses. His professional Mixed Martial Arts (MMA) record now reads 19 wins and one defeat.

All three fighters have publicly called for an inaugural UFC fight to be held on the African continent.

Acknowledging their calls, the UFC Chief Executive Officer (CEO), Dana White, recently confirmed in a podcast his desire to bring an UFC fight to Africa both in recognition of the current trio of African UFC champions and to fulfill his long held personal ambition to emulate the Muhammed Ali vs George Foreman’s ‘Rumble in the Jungle’ world boxing championship fight held in the Democratic Republic of Congo in 1974.

While UFC fighters, Ottoman Atzeital and his brother, Abu, have been campaigning ferociously for the inaugural fight to be held in Morocco, Usman and Israel Adesanya have also been very vocal about Nigeria being the host nation for UFC.

South Africa, with its well-developed infrastructure and pedigree of hosting the 2010 World Cup, is also a strong candidate with UFC insiders.

The chairman of Streamcent, a digital streaming company based in Nigeria and UK, Dr. Adrian Ogun, who promoted to the heavyweight boxing bout between Lennox Lewis and Hasim Rahman in Johannesburg, South Africa, in 2001, however, said tickets for the inaugural UFC fight in Africa should be made affordable to Africans.

“Regardless of where ever the inaugural UFC fight is held on the African continent, ticket prices and pay per view subscriptions should be set at a level that includes rather than excludes ordinary working class African fight fans.

“It is worth noting that the average ticket price for the 15,0000 crowd at Kamru Usman’s fight at the weekend in Jacksonville, is out of reach of the budget of ordinary Nigerians, Moroccans or black South Africans.

Ogun informed that based on information from UFC, $3,200,000 was generated from ticket sales from the 15,000 fans who attended the Kamaru/ Masvidal fight at the Veterans Arena in Jacksonville.

According to him, this meant that the average ticket for the fight was over $200 dollars per person or approximately N100,000.

“At N100,000 per ticket, only the elite in Nigeria would be able to attend an African UFC fight based on the Western promotional model applied at Kamaru Usman’s last fight. High entry prices preclude the plethora of adoring African fans from watching their heroes.

“Furthermore, in Nigeria, currently fans have to subscribe to cable/satellite channels that only have two million patrons out of a population of two hundred million Nigerians – which means the ordinary fan, who cannot afford arena ticket prices, cannot even see their heroes fight on TV without paying a hefty monthly subscription fee to a terrestrial sports channel,” Ogun added.

He informed that as a way out of this, Streamcent had come up with an app to stream live fights to fans through the mobile devices at as small amount.

“Our solution at Streamcent is to stream fights via our App to fight fans on mobiles and other devices at a small fraction of the cost of a cable subscription, while lowering prices to ensure the full inclusion of working class fans as well as the elite at the fight venue.

“Our African pay per view model for a UFC fight on African soil means a huge number of Africa’s more than 250 million smart phone users can watch the fight and the extra revenue more than makes up for any shortfall in venue ticket sales.

“This is a ‘win-win’ situation for the UFC promotion, ordinary fight fans seeking affordable viewing prices and our African UFC champions wanting to showcase their talents to mass audiences of all classes in Africa,” he said.

Speaking after his victory over Masvidal last Sunday at Jacksonville, USA, Usman expressed his desire to his fight stage in Africa, saying that, “one of the many monumental times in my career, but one of the things that I have always wanted to do is have a fight in Africa.

“The Ali-Foreman ‘Rumble in the Jungle’ is stuff I remember growing up. I have not had mine (opportunity) yet, but it’s coming. We are looking at coming to Africa in 2022, so I am really looking forward to that.”

Ramaphosa to answer questions on local polls to GBV in the...

Commitee tasked to monitor nurturing and growth of trees planted under...

International Friendly: All The Players Are Well Prepared For The Game...