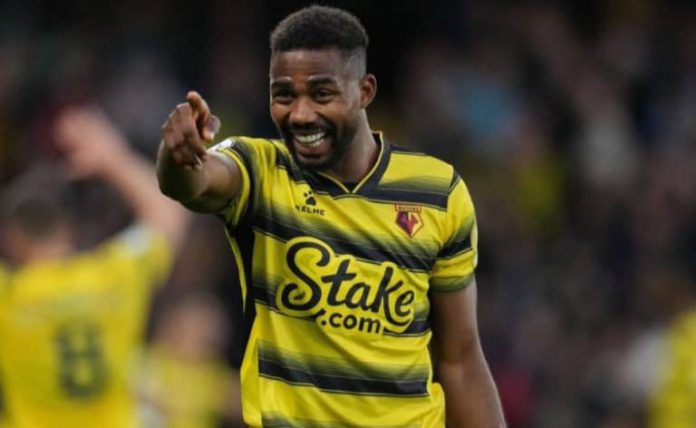 West Ham boss, David Moyes is keen to strengthen his goalscoring options in the summer transfer window with a move for Watford striker Emmanuel Dennis on the cards and is ready to pay £20million for the Nigerian striker.

The Europa League semi-finalists are keen to provide big backing for boss David Moyes this summer to build on two impressive full seasons under the Scot.

Dennis, 24, scored 10 goals for the Hornets this season and remains highly-rated by a number of bigger clubs. West Ham fancies their chances with Watford relegated and Dennis keen to stay in English football.

The Nigerian will have to take a wage cut which is written into his contract following his club’s fall into the Championship while Watford are well aware that they may have to sacrifice him to offset the drop in revenue.

He has four years left on his contract, having arrived for just £3million from Belgian side, Club Brugge, last summer. He is valued at between £20-30million with Watford expected to push for as much as they can as Brugge is due a sell-on fee. Dennis’s representatives are set to hold talks with Watford next week after their final game, at Chelsea on Sunday.

Newcastle is also keen but the Hammers are able to offer European football with the club in the Europa Conference League as things stand. They could, however, be back in the Europa League should they win at Brighton on Sunday and Manchester United lose at Crystal Palace.
Meanwhile, Dennis has missed out on the season’s Watford player of the Year award.

Dennis placed third behind veteran goalkeeper, Ben Foster and the eventual winner, Hassane Kamara who joined the team from French side, OGC Nice in the January transfer window.

Osimhen To Join PSG Next Season, As Club Start Negotiations With Napoli Chief

Outa calls on SIU to be ruthless when probing corruption at...