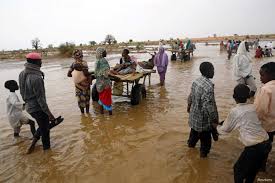 Torrential rain across parts of north and west Africa has resulted in heavy flooding, killing scores and ousting hundreds of thousands of people from their homes.

About 115 people have been killed after days of heavy downpours which brought record-breaking floods.

Sudan, through which the Nile river flows is in the middle of its rainy season, which lasts from June to October.

The rain and flooding exceeded records set in 1946 and 1988, forcing the government to declare a three-month state of emergency.

The United Nations has been working on providing emergency food assistance for the people, with hundreds of thousands of them still living in desperate conditions in makeshift camps.
Thousands of people continue to live with the threat of imminent rainfall and further flooding in parts of Sudan, months after floods ravaged nearly all of the country’s states.

It was gathered that the government has recently issued new warnings to those living on the banks of the Nile that rains in the highlands of Ethiopia could lead to more flooding along the river.

It was reported that floods have so far affected more than half a million people and caused the total and partial collapse of more than 100 000 homes in at least 16 Sudanese states. Camps for the displaced are growing in number and size in the outskirts of Sinjah.

A committee charged with the responsibilty of dealing with the consequences of the floods warned two weeks ago that the country may face more rains, adding that the water level in the Blue Nile rose to a significant record of 17.58 metres.

A flood victim, Hanan Shariff has been living in a makeshift camp for the past 13 days in Sinjah, a town in the southwestern state of Sennar, after the floods submerged her village.

She explained, ” We tried to build fences to protect our home but the winds were too strong, so we decided to salvage what we could and fled.”

All hope is lost. The floods destroyed our homes and swept away our livestock and everything we owned. We have nothing left, ” Rowda Tayyib lamented.

Mutwali Adam from UNICEF stated that people at the camp need basic humanitarian provisions like food, shelters and medicine.

He further explained, ” Local communities provided some food, and also we complement each other as humanitarian actors here in the field.”

This unpleasant development has further worsened the economy of the nation. Its government has declared an economic state of emergency after its currency fell sharply in recent weeks.

There has been continuous hike in the cost of food and transportation across the country. Moreover, prices of some staple foods have increased by 50 percent over the past few weeks

New Round of Libya Talks Kicks Off in Bouznika, Morocco

Maid feeds Employer’s Baby with Urine, Infects her with Syphilis