Numerous public figures have lost jobs and lucrative endorsement deals in recent weeks as a result of culturally insensitive comments from their past.

Now, it looks as though Maci Bookout’s husband, Taylor McKinney, might be next on the chopping block.

And once they see the appalling comments Taylor has made, Teen Mom OG fans probably won’t be running to this man’s defense.

The offending tweets are from 2011, long before McKinney met Bookout and gained fame on MTV.

But the 31-year-old was already an adult at that time.

And he should have had the sense to know there’s nothing funny about his so-called jokes.

In the first tweet — which was unearthed and republished this week by the fansite Teen Mom Madness — Taylor lashes out in homophobic fury all because someone offered him a piece of candy.

“No Mr. Male Receptionist at the Dr. I don’t want a sucker I’m not 12,” McKinney tweeted.

“And secondly guys don’t offer other guys suckers … That is gay.”

Sadly, McKinney’s tweets only get more ignorant from there.

“If you hashtag an insult … your a f-g,” Taylor tweeted a few months later.

Clearly, anti-gay sentiments were on McKinney’s mind a lot in those days.

Makes you wonder if he’s done anything to address those bigoted impulses in the years since.

If he has, the time to say so would be now.

But it’s not just the LGBTQ+ community that has incurred Taylor’s ire.

No, it seems he has some sort of bizarre, pent-up rage toward the Black community, as well.

We’re not sure who Taylor is addressing here, but his casual use of the N-word is not okay now — and it wasn’t okay then.

Youth and changing standards for acceptable language are often used as excuses for such offensive language.

But neither will get Taylor off the hook here.

Troublingly, his behavior is part of a larger trend among Teen Mom cast members.

Prior to that, Kailyn Lowry was called out for racist remarks she made on the show.

Taylor Selfridge has been fired for bigoted comments, but MTV has not taken any disciplinary action against its most popular stars.

McKinney is probably closer to Selfridge than the others in terms of popularity, but Maci’s star power might be enough to save his job.

To the chagrin of many fans, Taylor has yet to apologize for his remarks.

Perhaps he’s decided to lay low and hope that Maci can get him out of this one.

Maci Bookout to Mackenzie Standifer: STFU About My Drinking & Work on Your Train Wreck Husband! 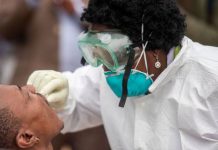 Kendall Jenner on Instagram: I’m Hotter Than Kylie and Here’s the...