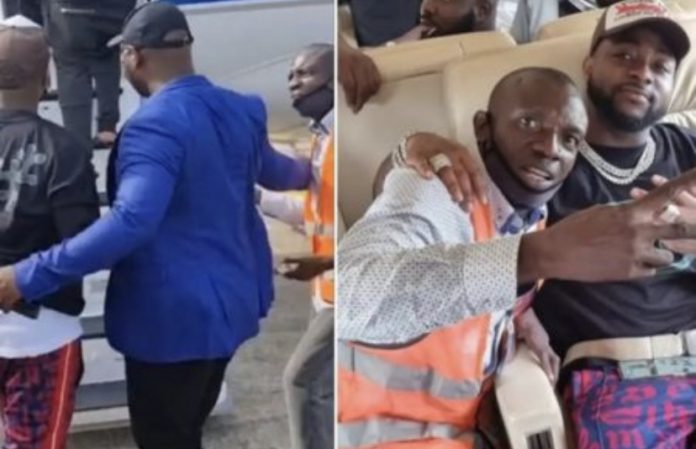 Davido has recently made the day of an airport officer who was embarrassed by his bodyguard.

In a viral video, the singer and his team were seen at the airport walking towards his jet to board, when one of the airport officials hurried from the side to take a selfie with him.

Unfortunately, the singer’s bodyguard shoved the man aside, which left many condemning the act while adding Davido could have intervened.

But the DMW boss somehow organized to grant the man’s wish as he called him into his jet and took a selfie with him.

blvck__girl said: “Even if Davido just breathe…I will still buy his music….”

tamara_mesky stated: “He even got a better picture in a private jet #lovedavido.

osasu__ said: “I really love Davido. Such a cool person.”

patriabae asked: “Where are the people that said he is rude?”

ifedolapo_bisola said: “That’s why I don’t believe everything I hear. David is such a sweet soul.”

myladytop said: “Davido do no wrong in my face, he is a good guy… Baba Imade.”

pregydollarsign wrote: “He wasn’t allowed to take a picture with Davido OUTSIDE the jet because he was bounced,now he took the picture INSIDE the jet!”

40 days later, and magistrate court IT system still in disarray

“Nollywood is not a refuse ground for evicted housemates” – AGN...