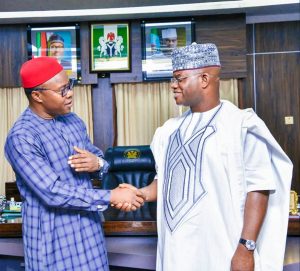 The Governor of Kogi State, Yahaya Bello has commended the proposed National Agricultural Land Development Authority (NALDA) scheme in the state, explaining that it would provide employment for 3,000 youths in crop farming, animal husbandry.

Governor Bello made this known when he received a delegation from NALDA to the state, led by its Executive Secretary, Mr Paul Ikonne, to assess the land provided by the State government for the project, a statement by Mr Onogwu Muhammed, Chief Press Secretary (CPS) to the Kogi State governor said on Sunday.

According to Muhammed, the project would be implemented under the Federal Government’s Cluster Agricultural Settlement Scheme.

Muhammed stated that after the meeting, Gov. Bello directed his Chief of Staff, Abdulkareem Jamiu to lead the delegation to inspect the designated land for the project, in company of Mustapha Akaaba, the Chairman of Ajaokuta Local Government.

The CPS quoted Jamiu as saying, “The project according to the design when completed, will employ over 3000 youths in crop farming and Animal husbandry.

“Due to the strategic position of the state in the country, an Agricultural market will be built and this will go way to settle the unending and unfortunate crisis over Northern farmers taking their produce to the South for sale.

“As the market will produce a conducive environment for farmers and traders to converge and do business.

“The influence of Governor Yahaya Bello has led to the project receiving the blessings of Mr President as workers would be mobilized to site as soon as possible.

“We appreciate the NALDA team on their assessment visit and promise that all hands would be on deck for the speedy actualization of the project.”

Man sentenced to life imprisonment for defiling and impregnating In-law

Awaziem back to fitness as Eagles round off group phase campaign

Israel Police In Standoff With Palestinians Over Jerusalem Eviction

There will be no mass disconnection of telephone subscribers, NCC Affirms