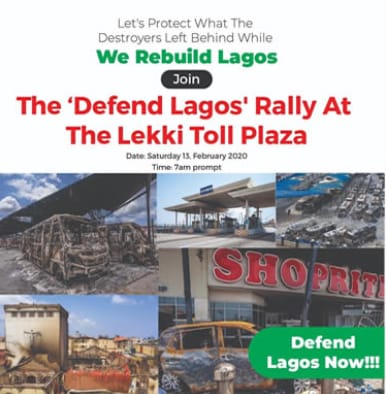 #DefendLagos is trending on Twitter as some Nigerians are planning to stage a counter-protest at the Lekki tollgate this Saturday, February 13.

This comes hours after some Nigerians who are against the reopening of the Lekki tollgate on Monday using the hashtag, #OccupyLekkiTollgate announced plans to stage a fresh protest at the tollgate on Saturday, February 13.

However, some Nigerians on Twitter are against the protest and have indicated plans to stage a counter-protest using the hashtag #DefendLagos.

One of the promoters of the #DefendLagos protest, Olusoga Owoeye @olusogaowoeye wrote “Show your love for our Lagos. Get your friends and your neighbors to be there. Join the DefendLagos Rally at the Lekki toll plaza on the 13th of February. We will not cede our city to criminals and insurrectionists. Lagos is our pride.”

Another promoter, @salamhunters, wrote “We will defend and protect our Lagos from looters and arsonists.”

The Lagos State Govt and/or the Nigerian Police Force will release a statement soon banning any protest on Saturday based on “security concerns” due to reports of “possible violence”.

That’s the real aim of the #DefendLagos noise. It’s all part of a bigger plan.

And to all young people who cannot read between the lines;

The only loser here is young people.

Lift the flag of Ghana high – Ga West MCE to...