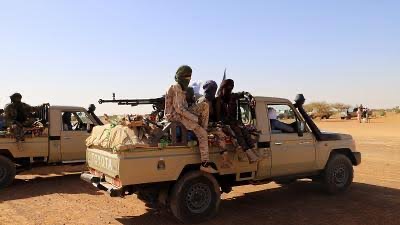 On Monday afternoon, “groups of armed, still unidentified individuals intercepted four vehicles carrying passengers back from the weekly market of Banibangou to the villages of Chinedogar and Darey-Daye,” the government said in a statement read out on public television on Tuesday.

“The toll from these barbarous acts (is) 58 dead, one injured, a number of grain silos and two vehicles burned and two more vehicles seized,” it added.

No group claimed responsibility, but Niger is struggling with two jihadist campaigns — in the west near Mali and Burkina Faso, and a decade-old insurgency in the southeast on the border with Nigeria.

The raids took place in the Tillaberi region located in the “tri-border area” — a flashpoint zone where the frontiers of Niger, Burkina Faso and Mali converge.

Earlier, a local resident had told AFP that the raids began with an attack on a bus travelling to Chinedogar, in which “around 20 people were killed.”

Another resident said those killed had been shopping at Banibangou, a major market town just a few kilometres (miles) from the Malian border.

“Armed bandits” then attacked villages at around 6 pm, killing about 30 people, a security source said.

The government announced three days of national mourning from Wednesday.

It called for “greater vigilance” from the population and reaffirmed its “determination to relentlessly pursue the fight against criminality in all its forms.”