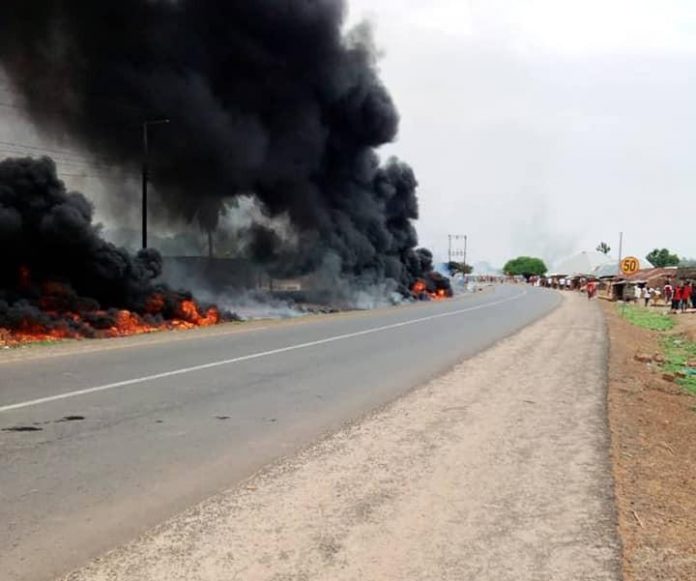 Unconfirmed number of people have been killed by a fuel tanker explosion in Oshigbudu community, in Agatu Local Government Area of Benue State.

It was gathered that the tanker fully loaded with petroleum products fell at the Oshigbudu-Obagaji junction, along Oweto-Abuja road on Sunday afternoon, April 18, and exploded.

According to an eyewitness, who identified himself as Enojo, the fuel tanker was turning Ubagaji/Oshigbudu junction when it fell down and poured its content which spread to a filling station along Oweto axis and exploded.

“The tanker fell down at a junction in Oshigbudu and while the contents gushed out it spread to a filling station where it exploded. The situation is still tense we can not ascertain the number of lives lost but some people were caught up in the inferno.” he told Nigerian Tribune.

The Vice Chairman of Agatu local government, John Ikwulono, who confirmed the incident said that many people might have lost their lives in the tanker explosion.

“At the moment, we can not ascertain the number of death now, the explosion happened at Ubagaji/Oshigbudu junction. The tanker was conveying fuel and fell down at that particular junction and fuel gushed out of the tanker and it spread to a nearby fuel station towards Oweto and the filling station caught fire and several houses around the area got burnt.” he stated.

When asked about the casualty, Ikwulono said, “people who were not able to escape also got burnt. The situation is still on, it is a very terrible thing.

“There is no fire service in Agatu and the only one we have in the zone, (senatorial district) is in Otukpo (which is about one hour drive to Oshigbudu) and when we contacted them, they said their vehicle had broken down.” he lamented.

Ikwulono said that the people had to resort to using water and detergent to put out the fire, but added that the damage had already been done.

Beware as thousands of fake COVID-19 vaccines are seized

Chad President seeks to run for Sixth Term after 30 years...