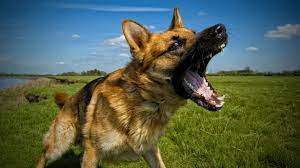 A 36-year-old man has reportedly died after he was mauled by two straying german shepherds in Lagos state.

The spokesperson of the state police command, SP Benjamin Hundeyin, disclosed this on Twitter.

”A few days back at about 11:30pm, two German shepherds strayed into the street and mauled a 36 year old man. He later died in hospital. Case is ongoing. Leash your dogs! You are liable for any damage caused by your pets,” his tweet read.

“Don’t let anyone use fake life to deceive you” – BBNaija...