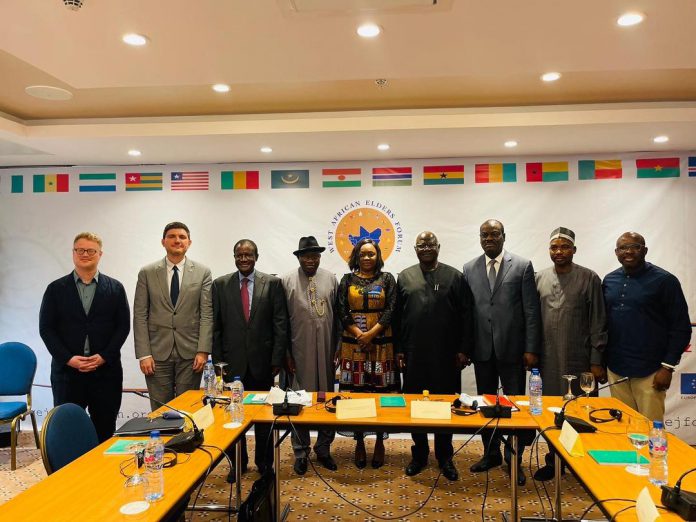 Former West African leaders under the auspices of the West African Elders Forum (WAEF) have called on political leaders in Africa to address security challenges in their countries and strengthen democratic institutions to enhance good governance and economic development
in the sub-region.

The leaders who spoke at a strategy meeting held in Abuja on Wednesday stated that for democracy to endure it must yield basic public goods to its citizens.

Chairman of the Goodluck Jonathan Foundation and convener of the forum, Dr Goodluck Ebele Jonathan in his opening speech expressed concern over the recurring military intervention in West Africa, adding that the forum is poised to actively engage key stakeholders to stem the tide of regression of democracy in the sub-region.

He said: “The sustainability of democracy in West Africa is key to resolving many of our challenges. I, therefore, appeal to all our leaders across our nations to make democracy work for the interest of all citizens.

A statement signed by
Wealth Dickson Ominabo, Communications Officer, Goodluck Jonathan Foundation noted that Jonathan also clarified that the forum was set up to complement the efforts of Governments and international organizations in the bid to promote peace and good governance in the sub-region.

He said further: “As stakeholders, we must therefore help in this regard and fashion out the best approach towards the strengthening of our political systems.

“Let me re-emphasize the point that is often made that for democracy to endure, it must yield basic public goods to its citizens. These include economic development, good social services, freedom, justice, peace and security.

“This underscores the place of good governance in our discourse of democracy. Democracy losses its meaning if it does not guarantee the economic status and social security of the citizens.

“Today, we must interrogate some fundamental issues such as recurring military intervention, democracy and good governance, peace and security, economic development as well as human trafficking in our sub-region.

Former President of Nigeria Chief Olusegun Obasanjo who joined virtually in his intervention called for a proactive strategy to forestall political crises in the region, adding that early warning signs should be leveraged to prevent degeneration of tenuous situations.
His words: “I believe that we need a proactive strategy and a reactive strategy. When we open our eyes we can see what is going on in most cases. We know what the end will be and we fold our hands until the inevitable happens, then we start shedding crocodile tears.”

He added that elected leaders should not manipulate the system to go beyond their constitutional term limits to avoid plunging their nations into avoidable crises.
Former President of Sierra Leon Ernest Bai Koroma in his remarks noted that the region was “experiencing a reversal in gains made over the decades, stressing that the forum should come up with proposals that would address our situation. “

Similarly, former Prime Minister of Senegal, Aminata Toure in her address stressed the need to focus on the prevention of election-related violence and charged the forum to set up a task force that would follow up on elections to prevent electoral violence.

“Most of the time we have a standoff between the government and the opposition and the civil society is not really equipped enough to handle these issues. Let’s build a network of conflict prevention. We need a network of people that can alert and signal on potential issues and talk about our problems before our problems deteriorate.“

Former Prime Minister Burkina Faso Kadré Désiré Ouédraogo called on ECOWAS to be more visible in the management of political crises, stating that such disposition would improve the credibility of ECOWAS.