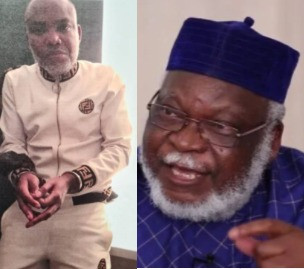 The Kenya government has denied allegations of being involved in the arrest and extradition of IPOB leader, Nnamdi Kanu, stating that “it does not want to be dragged into Nigeria’s internal affairs.”

This was made known by the Kenya High Commissioner to Nigeria, Amb. Wilfred Machage, at a media briefing in Abuja on July 2.

According to Machage, the allegation was “concocted” to pitch Nigerians in the south-east against the Kenyan people.

“I want to address the allegation by denying that Kenya was involved in the alleged arrest in Kenya and extradition to Nigeria of Mr Kanu. The allegation is fictional, imaginary and deliberately concocted to fuel antagonistic feeling amongst the southern section of the Nigerian people against the Kenya people.

“Indeed many countries have been accused — Rwanda, Czech Republic, Britain, Ethiopia — and God knows which other countries.

“I want to challenge anyone with facts relating to this alleged arrest in Kenya to present this fact. This will include how and who was particularly involved in the alleged arrest.

“Nigeria is a sovereign country. It’s your country. Instead of facing the Kenyan high commission in Nigeria to ask some of these questions, you should face your government. The government of Nigeria knows how they arrested him. They have the answers, not me,” he stated.

It should be recalled that days after Kanu was paraded in Abuja, his younger brother alleged that he was arrested and extradited from Kenya.

Varane Pens Emotional Message Ahead Of Departure For Manchester United