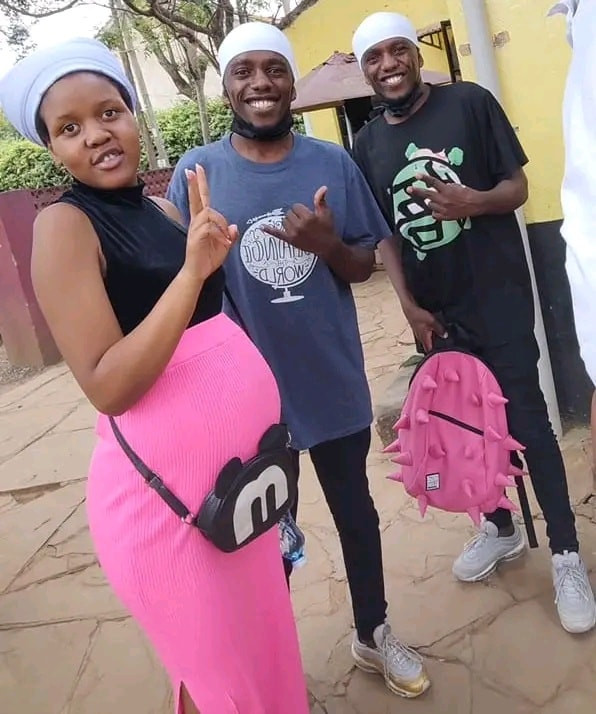 A Kenyan lady identified as Emily Nyaruiru, who is ‘married’ to identical twin brothers, Peter Kimathi and Teddy Kimathi is expecting their first child.

Emily, 18, said she is not sure who the father is as she is ‘married’ to both men and either of them could be responsible.

The expectant mother who went viral after she declared her love for the twins defended their relationship saying it is their choice and they are happy.

She dismissed people judging them based on their religion saying they are just humans and should not be viewed differently for their faith.

She noted that she enjoys making love to the twins and they keep her satisfied every time.

Emily disclosed that her mother had been against their relationship in the early stages.

“My mum had been against the relationship, especially them being twins. She asked me to opt for one. However, I insisted I’m ok with the duo. She is now very supportive,” she said.

The twin brothers refer to Emily as their wife, adding that the trio sleep on the same bed.

“We are family, this is our wife, me and my bro, we are twins. We live together, we share the same bed,” they said.

Speaking to a local station, Peter who met Emily first recalled that at the time he was dating Emily, there were moments he would allow his brother to handle phone conversations on his behalf.

All this while, Emily was unaware that she was speaking to someone else considering the similarity in their voices.

When questioned about how he felt when his brother fell for his woman, Peter calmly intimated that he was very much okay with the situation.

“We have grown up together, we have done things together, there is that brotherly bond therefore I saw no issue with it,” he stated.

Emily excitedly recalled that after meeting the two, she decided to love them both considering they had similar traits.

Despite the scenario, the twins who have lived with the same woman for one year maintained that they will all be caring for the child and fulfilling their responsibilities.

“She called us on a surprise date, we go out together, she showed us the pregnancy test results at first we were shocked but later accepted because we are serious with her, ” Peter stated.

Speaking about how they manage their decisions, the twins intimated that they are both heads of the family and share equal responsibilities.

They additionally pointed out that at the start of their newly found love things were difficult from acceptance amongst family members to members of the society and neighbours, however with time, the dust finally settled and people respect their relationship.

With a baby on the way, the trio vow to continue living together in love and harmony as they care for their new bundle of joy.

Balenciaga accused of sexualising kids after posting ads with children with...

World Bank to Fund Zambia with $275 million for the next...