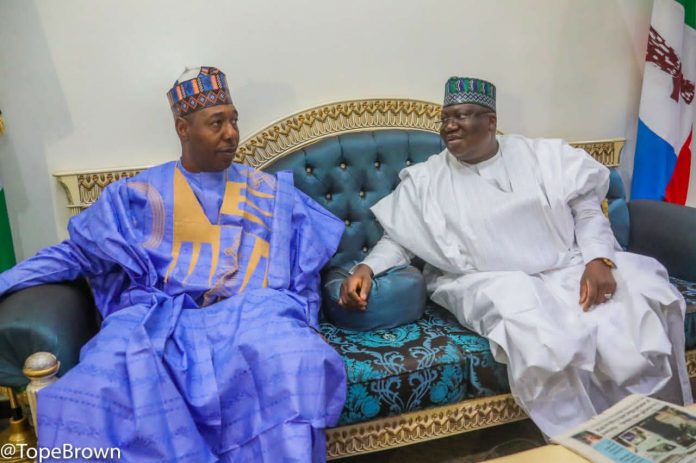 The President of the Senate, Ahmad Lawan has put off all his political engagements for Wednesday to mourn the farmers killed by the terrorists in Borno state on Sunday.

More than 50 farmers were reportedly killed on the outskirts of Kala Balge Local Government Area by terrorists suspected to be Boko Haram ISWAP.

Lawan had already scheduled some engagements for Wednesday one of which was to meet with the All Progressives Congress(APC) leaders and delegates in Borno state.

He was also scheduled to proceed from Maiduguri to Gombe also to meet party leaders and particularly the delegates to canvas support for his Presidential bid ahead of the upcoming primaries of the APC.

Lawan decided to put off all his political engagements for the day on account of the tragic incident and instead proceeded to Maiduguri only on a condolence visit.

At the Palace of Shehu of Borno, Lawan said: “We are in Maiduguri for a very solemn event. We had wanted to come to meet with the delegates in continuation of the campaign for the flag of our Party, the APC, for the Presidential race.

“Because of the sad event that took place in Kala Balge where over 50 of our people were killed, we felt that it was only appropriate to come to Borno to condole with the Government and people of Borno state.

“We pray that Almighty Allah will forgive their sins and Aljannah Firdaus be their final resting place.

“Your Royal Highness, you have been consistent in your support for the Federal government to fight the insurgency in this part of our country.

“The situation is far better than before. We are very hopeful that before this administration will complete its tenure next year, we will have a better security situation in this part of the country and indeed in all parts of the country by the Grace of God.”

Earlier at the Borno state Government House, the Senate President told the Governor that all his political engagements for Wednesday had been put off in honour of the farmers who were killed by the terrorists.

“We are therefore here to condole with you, the government and the people of Borno state for this loss. This is a time for sympathy and empathy. This is not time for politics.

“So we have come to condole with you and of course, we have put off the political engagements in honour of our citizens who were killed by Boko Haram ISWAP.

“Your Excellency, let me commend you for everything that you have been doing in Borno state and particularly your concern in ensuring that you continue to partner with the Federal government to fight the insurgency here and also ensure that all the IDPs are back into their communities.”

Responding, Governor Zulum thanked the Senate President and his entourage for the gesture.

He said Borno and Yobe, the home state of the Senate President were one and prayed that the existing relationship between the two states “will never be soured.”

Shortly on his arrival in Maiduguri, the Senate President headed straight to New GRA, to the family house of his Chief of Staff, Dr Babagana M. Aji to commiserate with him over the death of his mother, Hajia Falmata Wakil Modu Aji.

At the residence, prayers were offered for Allah to forgive her sins and admit her to Aljannah Firdaus.

Hajia Falmata died Sunday night at the age of 95 years and was buried on Monday.