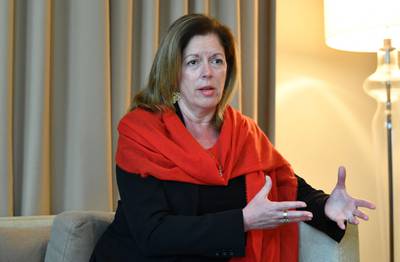 United Nations Special Adviser on Libya, Stephanie Williams has stated her concern regarding the country’s oil company, National Oil Corporation (NOC) and all sovereign institutions, advising hat it should not be politicized.

Ms. Williams outlined her vision for the future of the country as she leaves the position she has held since 2021.

Ms Williams’ main priority was to listen to the millions of Libyans who registered to vote in order to restore the legitimacy of the country’s institutions through national elections.

She appreciated everyone she had worked with for cooperating with her efforts to put Libya back on the pathway to elections within a firm constitutional framework.

She applauded the lifting of the oil blockade but noted concern around efforts to politicise the National Oil Corporation (NOC) as that and all sovereign institutions should enjoy “complete autonomy and independence from political manoeuvring”.

Before being appointed in the Libya role, she had previously served in two other UN positions and as part of the US Senior Foreign Service had worked on Libyan issues since 2018. As well as these roles, Ms Williams has held extensive diplomatic positions throughout the Middle East.

She graduated with honours from the University of Maryland in 1987 with a double degree in economics and government relations. In 1989, she earned a master’s degree in Arab studies from Georgetown University’s Centre for Contemporary Arab Studies.

Between Cultural Norms and Gender Stereotypes: Do Egyptian Men Hide Their...