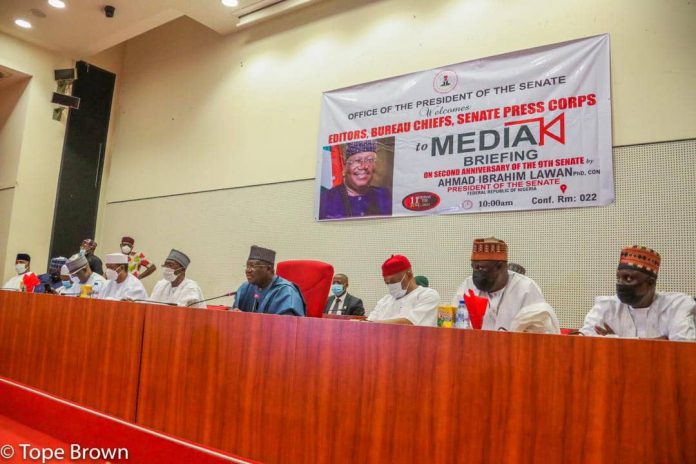 President of the Senate, Ahmad Lawan, has said that the National Assembly won’t hesitate to issue a warrant of arrest on any government official that refuses to appear before its Committees to account for public funds in their trust.

Lawan made this known on Friday while fielding questions at a briefing of Editors, Bureau Chiefs and members of the Senate Press Corps to mark the 2nd anniversary of the ninth Senate in Abuja.

The Senate President was reacting against the backdrop of likely concerns into findings by the Public Accounts Committee on the report of the Auditor-General for the Federation on the accounts of the Federation for the year ended 31st December 2015.

The report was laid on Tuesday this week by the Public Accounts Committee Chairman, Matthew Urhoghide (PDP, Edo South) during plenary.

Lawan said, “The Public Accounts Committee normally works with the report of the Auditor-General for the Federation.

“[And] the report of the Auditor-General is an annual report. Normally, report infractions where an agency was given money, there was an expenditure that the Auditor-General could not understand, he will give thirty days for that organization to come and explain.

“If the agency does not come forward in thirty days to give an explanation, that issue is put in the Auditor-General’s report.

“It is not a final indictment, so to speak. The Public Accounts Committee is supposed to invite the agency to come and explain what the Auditor-General is reporting.

“[And] I’m sure that our public accounts committee has been doing its best. Where an agency refuses to appear, we normally have some other ways of maybe after three invitations to appear, then we go for the warrant of arrest.

“I served as Chairman of the Public Accounts Committee for eight years, and I had the benefit of getting my Senate President to sign a warrant of arrest of some people who felt they were so big. [And] at the end of the day, they ran all over the place looking for a soft landing.”

“But I can assure you, that majority of public servants invited to come before the committees of the National Assembly appear, only a few sometimes fail to appear.

“Now, those few, if we judge their absence to be defiance, we will take the appropriate action.”

Speaking on the relationship between the legislature and the executive arm of government in the last two years, the Senate President dismissed insinuations that the National Assembly is a “rubber stamp” of the executive.

According to him, the ninth assembly’s resolve to collaborate with the executive arm of government owed to its decision to work patriotically in the interest of Nigerians.

He added that a frosty relationship between both arms of government as previously characterised in past assemblies had time and again failed work in the overall interest of Nigerians as they always are the losers.

“The relationship between the executive and legislature between 1999 and 2003 was largely characterized by mostly fighting and total lack of coordination and collaboration.

“The legislature must have its pride of place. In fact, in the constitution, the first arm of government mentioned is the legislature before the executive arm, then the judiciary.

“The legislature is even the senior partner in government, if I may say so. But what is important is for the legislature to know its mandate and obligations to understand that it has an oversight function over the executive arm of government and even the judiciary, to uphold the separation of powers between the various arms of government.

“In 2019 when we campaigned,  we said when we are given the opportunity to serve in this capacity, we want to establish a working relationship based on mutual respect, cooperation, consultation, synergy and partnership with the executive arm of government.

“Not at the expense of our roles as the legislature, but we believe that we can get a better outcome in terms of government delivering services to the citizens of this country. That is what informed our position.

“[But] it appears that what some people expect from a legislature, or a relationship between the two arms – the legislature and the executive – is stone-throwing, fights, insults, punching and so on.

“I can tell you we disagree with the executive, but the difference between us and what might have happened previously is that we are able to sit down and talk and say no, we are not accepting this one, you should withdraw it.”

Reacting to the recent ban of Twitter by the Federal Government of Nigeria, Lawan expressed optimism that the engagement between Nigeria and Twitter would resolve the contentious dispute.

He said, “the Honourable Minister of Information and National Orientation, Alhaji Lai Mohammed, informed Nigerians that they are talking with Twitter to resolve this matter.

“Our expectation is that this engagement between the Federal Government of Nigeria and Twitter would resolve the dispute between Twitter and our government.

“[But] beyond that, I’m an optimist. I believe that all of us would have learnt our lessons.”