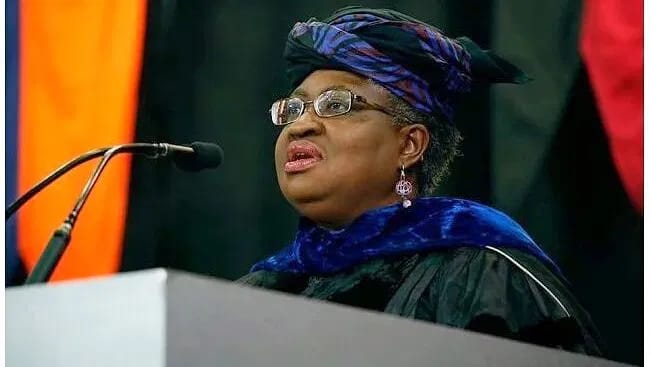 The chairman of the selection committee, David Walker and his co-facilitators disclosed on Thursday, October 8, that Ngozi Okonjo-Iweala, a Nigerian and Yoo Myung-hee from the Republic of Korea have advanced to the final round of consultations which will determine the next director-general of the World Trade Organisation.

Walker revealed that the two remaining contenders “secured the broadest and deepest support from the membership” and they are of “outstanding qualifications.”

He affirmed that the ultimate objective of the selection process is to secure a consensus decision by members on the next director-general.
“Based on the depth and breadth of preferences articulated to the facilitators, Amb. Walker told a Heads of Delegation meeting on 8 October that the two candidates who secured the broadest and deepest support from the membership and who should subsequently advance to the final round are Ngozi Okonjo-Iweala of Nigeria and Yoo Myung-hee of the Republic of Korea.

“The result creates a historic precedent for the WTO in that it assures that the 7th Director-General will become the first woman to lead the organization. These two candidates were chosen from a field of five that had advanced to the second round of consultations.

“Our aim continues to be to encourage and facilitate the building of consensus among members and to assist in moving from this final slate of two candidates to a decision on the appointment. As this is the final round of the consultation process, it should bring us to the point where we can make a recommendation to the General Council concerning that decision,” Walker explained.

“On behalf of the entire membership, I would like to express deep gratitude for their participation in this selection process. It was clear that members consider them individuals of outstanding qualifications. I am sure you will all agree with us that in participating in the selection process, the candidates have all made a significant contribution to the standing and image of the WTO,” he intimated reporters.

By proposing two women at the final round of the selection process, it depicts that the WTO is set to have the first female director-general in its 25-year history.

She has garnered experience from working at international governance bodies as a former managing director of the World Bank, and as a chairman at the Global Alliance for Vaccines and Immunization.

Meanwhile, Myung-hee is South Korea’s trade minister. She was able to help to expand her country’s trade network through bilateral accords with the United States, China and the United Kingdom all through her 25-year career in government.

Mr Walker added that the final phase of the consultation process will commence later in the month until November 6. Thereafter, the director-general will be announced.