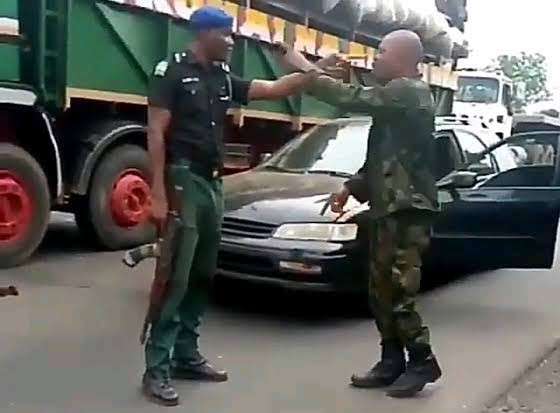 A police inspector, Ben Thompson, and an official of the Lagos State Traffic Management Authority, Caleb Akerele, have been hospitalized after they were allegedly assaulted by two bus drivers who were dressed in military camouflage along the Eko Bridge.

The drivers were reportedly conveying passengers on a one-way route from Costain to Ijora Olopa in commercial buses, when they were accosted by the traffic officers.

The officers reportedly ordered them to turn back, which started an argument.

The drivers were said to have pounced on the officers and beaten them up.

The LASTMA spokesperson, Taofeek Adebayo, who confirmed the incident, said one of the military officers was apprehended.

He said, “Two commercial buses fully loaded with passengers were driving one-way from Costain to Ijora Olopa and they were challenged by a policeman and a LASTMA officer, who asked them why there were plying one-way.

“After several pleas to turn back, the two commercial drivers, who were putting on army camouflage, descended on the two officers and started beating them. It took the intervention of a team of policemen from Ijora to rescue the officials.

He slapped me with money: Iyanya reacts to pushing fan off...

Sexual Enhancement Drugs Can Lead To Your Death – NAFDAC