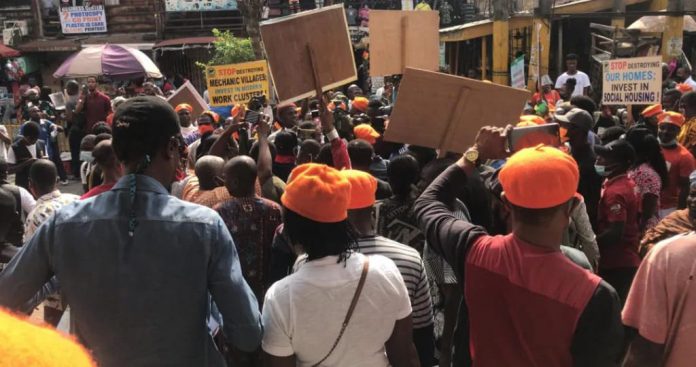 “RevolutionNow” which is a codename for a group identified as Coalition for Revolution (CORE) has scheduled to hold a worldwide protest on Thursday, October 1, 2020.

The group, while calling for the immediate resignation of the President of Nigeria, Major General Muhammadu Buhari (retd.), has also urged Nigerians to come out en masse to protest bad governance

The group is led by a former presidential candidate and Sahara Reporters publisher, Omoyele Sowore.

#RevolutionNow requested for a change in the electoral process of the country in order to allow Nigerians in diaspora vote come 2023 general elections.

In a statement issued by the group, it read in part, “The Coalition for Revolution is calling on all Nigerians at home and in the Diaspora to come out en masse on, October 1, and participate in a massive peaceful protest to demand the reversal of anti-people policies implemented by the President Muhammadu Buhari-led administration.

“These harsh policies that have bored a burdensome hole into the pockets of the Nigerian people are coming at a time when citizens are recovering from the adverse effect of the COVID-19 pandemic, a global health crisis that was also mismanaged by the Buhari government, plunging already struggling citizens into deeper financial problems.

“It also comes at a time when there is an unprecedented dictatorial-style crackdown on free speech, dissent, activism, journalism and the right to associate and congregate peacefully and protest.”

The group stated that it was mobilising all Nigerians to protest and demand action on the reversal of the hike in the price of petrol from N148 to N151; an end to state-supervised and approved impunity under the watch of Buhari; and the sacking of all service chiefs for failing to deal with the insecurity problem.

It called for an end to the killing of all members of the Indigenous People of Biafra and the prosecution of all police and military officers fingered in their harassment; and the unconditional release of Shiek Ibrahim El-Zakzaky, leader of the Islamic Movement in Nigeria and his wife Zeenat.

It also called for an end to the disappearance of government critics and extra-judicial killings by law enforcement officers who are supposed to protect and serve the Nigerian people.

CORE has alleged plans by the Nigerian police to hinder the protests in some locations. It therefore, advised protesters to be vigilant and avoid confrontation.

“All participants are also encouraged to bring fully charged mobile devices to record, live-streams and document everything.”