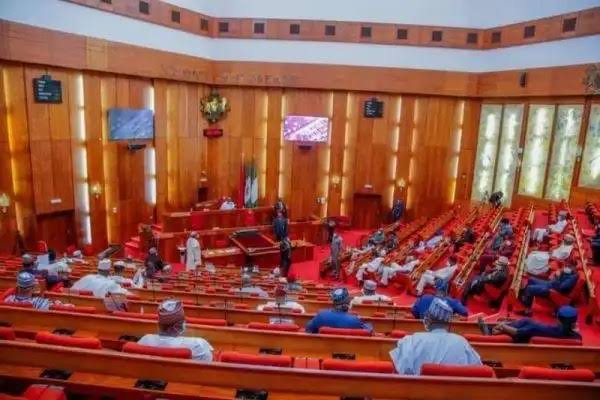 The Senate on Tuesday passed a bill seeking to establish the Electoral Offences Commission.

The passage of the bill followed the consideration of a report by the Committee on Independent National Electoral Commission (INEC).

Chairman of the Committee, Senator Kabiru Gaya (APC, Kano South), in his presentation, said the bill became imperative in view of INEC’s inability to prosecute electoral offenders in accordance with the provisions of section 149 and 150(2) of the Electoral Act (as Amended).

“By the foregoing statistics, it is unrealistic to expect INEC to conduct a free, fair and credible election and simultaneously prosecute Offences arising from the same elections.

“Indeed, INEC has at several occasions admitted that it lacks the wherewithal to cleanse the system.

“Its failure to prosecute even one percent 870,000 and over 900,000 alleged electoral Offences in 2011 and 2015 general elections respectively is an affirmation of the necessity for a paradigm shift on how we deal with electoral offences”, the lawmaker said.

According to him, as a result of electoral flaws in the system, the Justice Uwais Electoral Committee; Sheik Nurudeen Lemu Committee; and Constitution and Electoral Reform Committee were constituted.

He recalled that the Committees in their final reports recommended that for INEC to function efficiently, some of the functions currently performed by it should be assigned to other agencies.

Accordingly, the Senate during consideration of the INEC Committee report, approved the establishment of the National Electoral Offences Commission.

The Commission’s membership consists of the Chairman, Secretary and representatives from the Justice, Interior, Defence, and Information Ministries.

The function of the Commission includes investigating electoral Offences created in any laws relating to elections in Nigeria; prosecution of electoral offenders; and maintaining records of all persons investigated and prosecuted.

Others are to liaise with the Attorney-General of the Federation and government security and law enforcement bodies and agencies in the discharge of its duties; liaise with other bodies within and outside Nigeria involved in the investigation or prosecution of electoral Offences; and adopting measures to prevent, minimize and eradicate electoral Offences throughout the federation.

The Senate in Clause 12 of the bill approved at least five years imprisonment or a fine of at least N10 million naira or both, for any officer or executives of any association or political party that engages in electoral fraud that contravenes the provisions of clauses 221, 225(1)(2)(3) and (4) and 227 of the 1999 Constitution as amended.

The upper chamber adopted the Committee’s recommendation of fifteen years imprisonment for any person involved in ballot box snatching, supplying voter’s cards to persons without due authority, unauthorized printing of voters’ register, illegal printing of ballot paper or electoral document, and importation of any device or mechanism by which ballot paper or results of elections may be extracted, affected or manipulated, and voting at an election when he is not entitled to vote.

It also approved ten years imprisonment for any person who sells voter’s card, or in possession of any voter’s card bearing the name of another person, or prepares and prints a document or paper purporting to be a register of voters or a voter’s card.

The Senate also gave its nod to a term of at least ten years upon conviction for any  election official who willfully prevents any person from voting at the polling station, willfully rejects or refuses to count any ballot paper validly cast,  willfully counts any ballot paper not validly cast, gives false evidence or withholds evidence, and announces or declares a false result at an election.

The upper chamber in Clause 20(2) approved at least fifteen years imprisonment for any judicial officer or officer of a court or tribunal who corruptly perverts electoral justice, during or after an election.

In addition, any person found to disturb the public peace on Election Day by playing musical instruments, singing or holding an assembly where a polling station is located shall be guilty of breaching electoral peace and liable to six months imprisonment or a fine of at least N100,000 or both.

Also, any person acting for himself or on behalf of any organization or political party or candidate or his agent to prejudice the result of an election, damage or defame, in any manner, the character of any candidate in an election or his family member by making, saying, printing, airing or publishing in the print or electronic media false accusation on any matter shall be guilty of serious corrupt practice and liable on conviction to a term of at least ten years or a fine of ten million naira or both.

Any person soliciting or giving votes for or against any political party or candidate at an election, or found to affix campaign materials on any private house, public buildings or structures, or prints posters and banners without the name and address of the political party to which the candidate or person belongs contravenes sub-clause (1) to (5) and guilty of an offence and liable to at least five years or a fine of at least ten million naira, or both.

It provides a twenty years jail term without the option of a fine for any person who propagates information that undermines the independence, sovereignty, territorial integrity, or unity of the federation.

Also, any candidate or agent who damages or snatches ballot boxes, ballot papers or election materials before, during and after an election without the permission of the election official in charge of the polling station attracts at least twenty years imprisonment or a fine of at least forty million naira.

The upper chamber approved three years and not more than five years imprisonment for any person who provides false information in any material particular to a public officer.

It also gave the nod for at least ten years imprisonment or at least twenty million naira fine or both for any person who uses hate speech to stir up ethnic, religious or racial hatred, social or political insecurity or violence against anyone or group of persons.

Women and children rights must be protected, says Onu

Watch 2022, all church restrictions due to Covid will be removed...