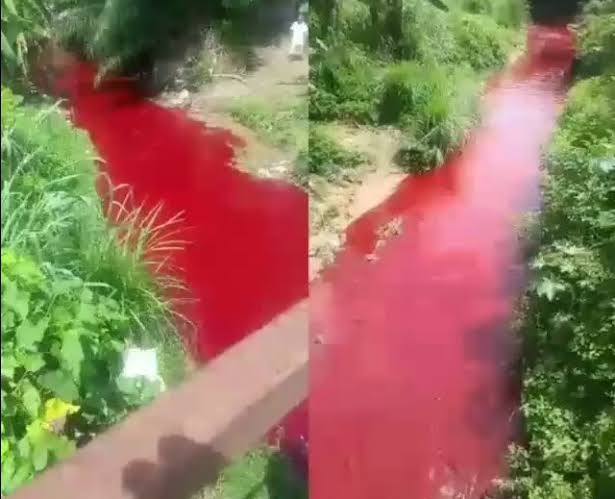 The Nwuna river that traverses four communities of Nomeh, Unateze, Mburumbu and Nkerefi communities in Nkanu East local government area of Enugu state has reportedly changed its colour into blood colour and thereafter to black recently.

The facts or mystery that led to the development is still unknown. The State Government under the leadership of Governor Ifeanyi Ugwuanyi, has constituted a fact finding committee that will under study the situation and report back to the state government for necessary actions.

The team which is headed by the Special Adviser to the Governor on Water Resources, Hon. Anthony Dubem Onyia and the Managing Director of EN-RUWASSA, Dr. Frank Omeje, last week visited the Nwuna River and the rural dwellers in those four communities.

Meanwhile, there has been accusations and counter accusations alleging that the river was poisoned by Fishermen, using dangerous chemicals.

There are also suspicion that an Ethanol production factory located at Ituku/Ozalla, known as D-HAP Enterprises Services Ltd, which sources water from the Nvuna River might have discharged it’s waste into the Nwuna river.

The South East post checks gathered that Enugu state government team in the cause of their primary investigation so far discovered that there was a contamination in the river which adversely affected aquatic life in the river.

Water samples for laboratory test has been collected, in line with international best standards.

The Special Adviser on Water Resources to Governor Ugwuanyi, Hon. Onyia, stated that the state government is committed in getting to the root cause of the problem and addressing it.

He advised them to avoid drinking water from the contaminated river, adding that the state government is already considering emergency interventions such as drilling of boreholes for the affected communities prior to the river clean up exercise, among others.