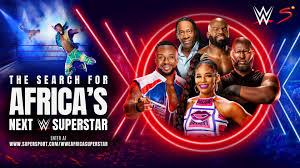 The World Wrestling Entertainment in conjunction with its Sub-Saharan Africa broadcast partner, SuperSport, have announced a continent-wide talent search to find Africa’s next WWE Superstar.

The campaign was announced in an interactive media briefing in Lagos, to herald Lagos as the host city for a multi-day tryout in February 2023.

WWE Head of Talent Operations and Strategy, James Kimball, led the delegations from the US to meet with the SuperSports team led by the Chief Executive of SuperSports, Marc Jury.

According to Kimball, the search for Africa’s Next WWE Superstar “is now open to Nigerians and citizens of other African countries and their submissions will be accepted until December 18.”

“Interested candidates are to submit a video highlighting their potential to become a WWE Superstar. Successful applicants will be invited to participate in the Lagos tryout in February 2023.

A select number of tryout participants will be awarded an all-expense-paid experience to continue their tryout journey alongside current and prospective WWE superstars, ahead of WrestleMania 39 in Los Angeles in April 2023.”

NDC leaders will iron out issues with Minority on January 31...