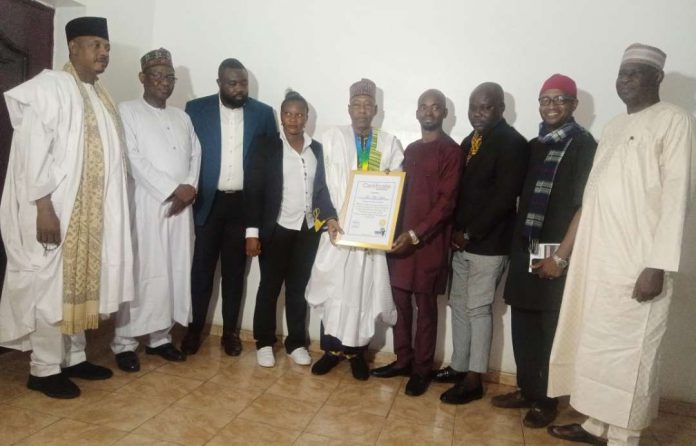 Ciroman Yola, as Abba Abdulahi is fondly known is currently, Chief of Staff to Minister for Youth and Sports Development, Chief Sunday Dare said he was extremely honoured and grateful to receive the important award. He said the Award will spur him on to do more by contributing to the development of youth through sports.

He said the achievements would not have been possible without the doggedness and pragmatic approach of his boss, Minister of Sports, Hon. Sunday Dare with full support of His Excellency, President Muhammadu Buhari.

Widely acknowledged as a vastly experienced sports administrator, the organisers of the prestigious awards, Youth Partnership For Africa’s Development (YOUPAD), described him as a consummate Pan Africanist.

In the letter of recognition signed by President of YOUPAD, Hon. Coulibaly BN Hameed, it extols Abba Yola, for his leadership ideology and high administrative prudence. It also commended him for his hardwork and dedication to national service via the sports sector.

The softly spoken awardee was equally praised for his well articulated policies which has positively transformed sports development in various capacities of his services to Nigeria, as well as, his leadership with zero tolerance to corruption, nepotism and favouritism.
Past illustrious recipients of the prize include President Umar Al-Bashir of Sudan, IGP Ibrahim Idris and Prof. Chukwuma Ozumba, amongst other distinguished Africans.
The awards event was held at Parakou Crescent, Wuse 2, Abuja.

Suspects nabbed during attempted armed robbery at OR Tambo airport

‘Ramaphosa must fall on his own sword and just resign’ –...