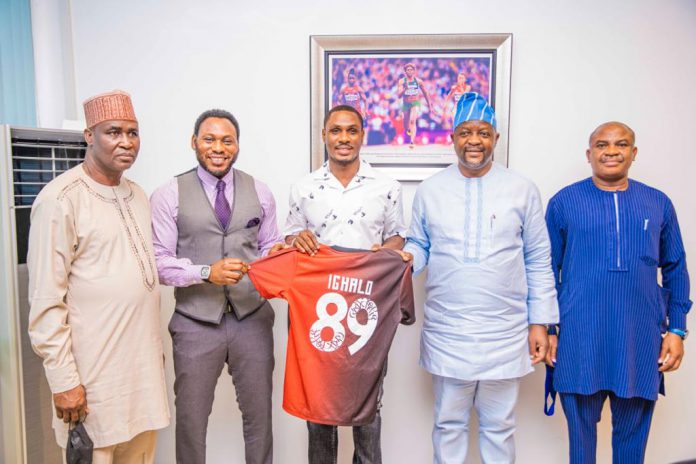 The acting Director of Sports, Mr. Luka Istifanus said he is ready to work with FCT SWAN and assured them of his support.

He gave the assurance when the Bunmi Haruna-led executive paid him a courtesy visit in his office today at the FCT Sports Council, Area 3 Garki, Abuja.

Mr. Luka said the sports writers are paramount to the course of the FCT Sports Council and that one cannot do without them hence they are going to work with them.
He disclosed that he is aware of another group but urged the chairman of the association, Comrade Bunmi Haruna to try to bring those that are aggrieved back to the association. “Try to make them understand that election is a win or loose thing.

Everybody cannot win at the same time. There must always be a winner and a loser. Losing election does not make you loser.”
He also noted that he is glad with the caliber of persons in the present exco. “I am glad with the faces that emerge, we will do everything possible to make your work easy.”

Responding, FCT SWAN Chairman, Comrade Bunmi Haruna congratulated the acting Director of Sports for his new position and thanked him for his fatherly care he showered towards his members during the last National Sports Festival in Benin City, Edo State.

Mr. Haruna also wants the cooperation of the acting Director in the area of coverage of events, partnership and sponsorship.
In his closing remarks, the deputy director, Dr. Charles Agadu assured the team that they are going to work with the Haruna-led executive to take sports to greater heights in the territory.

He further assured them that they will maintain the relationship with the team which has spanned for so many years.

Marikana massacre: Amcu reveals it has built over 30 houses for...

Messi Unsure of His Future with PSG