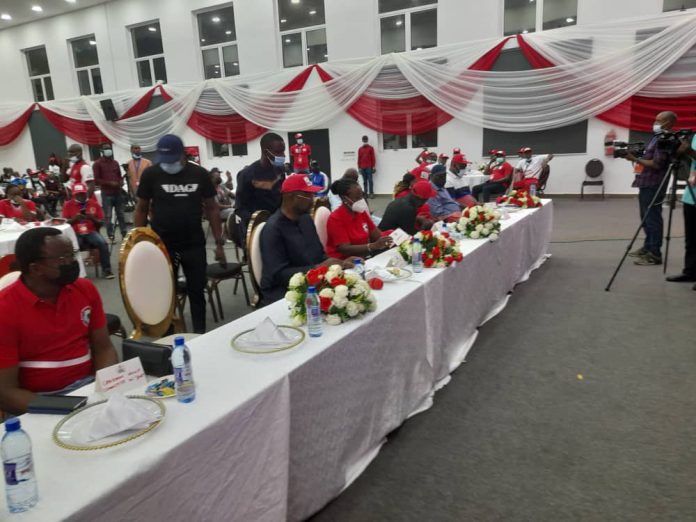 Minister of Youth and Sports Development Mr Sunday Dare has re-affirmed the commitment of the FG to the development of women football in Nigeria.

The Minister gave the assurance during the draws of the maiden edition of the Betsy Obaseki women football tournament held in Benin on Sunday.

The Betsy Obaseki women football tournament is sponsored by the First Lady of Edo State, Mrs Betsy Obaseki as her own contribution to the development of the game in the country alongside the private sector.

According to the Minister, “This competition is a re-affirmation of the important place of women’s football in our country and also an attestation of the status of Edo State as the home of Football in Nigeria.

“Coming just a few days after Nigeria successfully hosted the the First Lady, Dr. Aisha Buhari Cup in Lagos only confirms Nigeria’s leading role in women football on the continent and the importance attached to the development of the girl child.”

The Minister further said, “As a Ministry, we are interested in creating a new roadmap for football(both men and women).We are grateful that her Excellence, the First Lady of Edo State, Mrs Obaseki is also partnering with the women football league to promote the women’s game.

“As Edo State comes agog hosting the best of women footballers, we look forward to fresh discoveries and the best that this country can offer.

“Once again, let me most sincerely thank his Excellence the Edo State Governor Mr Godwin Obaseki and his equally sports loving Deputy, Comrade Phillip Shuaibu for lending support to her Excellency by agreeing to play host to this tournament.

“We all look forward to the hospitality of the good people of Edo which is the heart beat of sports in Nigeria.” Dare concluded.