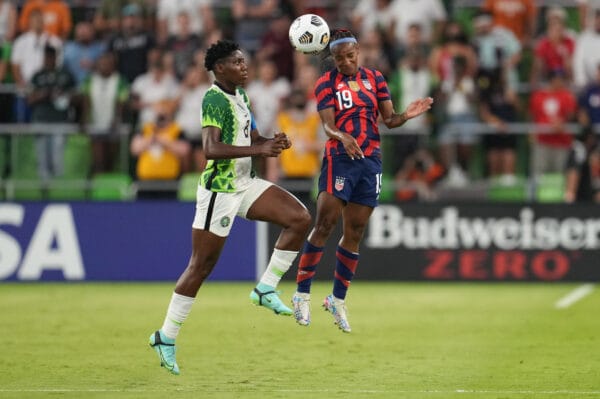 Super Falcons and Barcelona forward Asisat Oshoala has thumped her chest to acknowledge her brilliance on the football pitch.

Only last week, Oshoala scored with an exquisite chip as Barcelona demolished Villarreal 4-1 on matchday three of the 2022-23 season of the Primera Division Femenina.
And on Saturday afternoon, Oshoala featured for an hour as Barcelona cruised to a convincing 7-0 triumph over Madrid CF at the Estadi Johan Cruyff.
Oshoala was not among the scorers, but she was still so impressed with her performance that she took to her Twitter page afterward to applaud herself.

“From the motherfuckin ghetto to this point LOL. I’m good at this shit n ain’t nobody gon tell me otherwise,” the former Arsenal striker wrote.
Last season, Oshoala made 19 Primera División Femenina appearances, scored 20 goals, and provided one assist to finish as the division’s joint-top goalscorer.

Her goals were crucial to helping Barcelona claim their sixth league title. Oshoala has three of those winners’ medals in her trophy cabinet and thanks to her undeniable brilliance in Spain, Oshoala won the Africa Women Footballer of the Year award for a fifth time, more than anyone in history.

That is not the only mark the former Liverpool striker has made since joining Barcelona in 2019.

GH¢575.7bn debt could be much higher than announced – Jackson