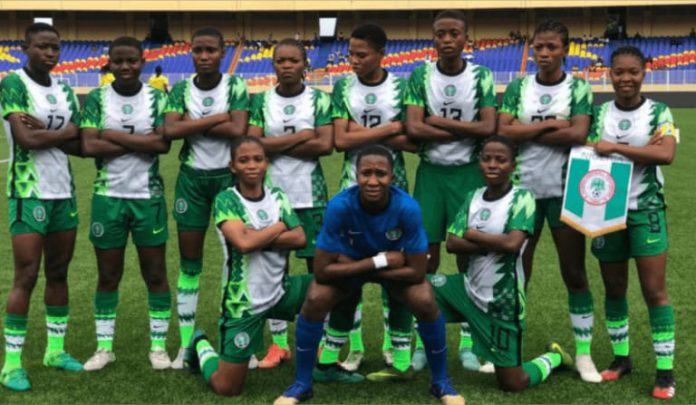 After a hard-fought 2-1 victory against Chile yesterday, Nigeria’s Flamingos have booked their passage to the quarter-finals of the ongoing FIFA U-17 Women’s World Cup finals in India.

Nigeria faces the herculean task of wrestling the ticket from the goal crazy USA girls on Friday.

Blessing Emmanuel’s goal in the 4th minute of the game and Bisola Mosaku’s strike off a free-kick by dead-ball artist Miracle Usani with eight minutes left was enough to see Nigeria through at the Kalinga Stadium, despite a late penalty converted by Roverner Tali.

A record-breaking 8-0 win against host India in the opening match and a well-played 1-1 draw with Brazil in its second game, USA went further to maul Morocco 4-0 in its final Group A match to set up a date with Flamingos.

Nigeria finished with six points, and a plus six goals advantage after scoring seven goals and conceding only two.

USA on their part sits at the zenith of Group A with 7 points,  a massive 12 goals haul and conceding just one in their 1-1 draw with Brazil.

As was the case against New Zealand last Friday, the Flamingos created a slew of opportunities that were not converted, but Head Coach Bankole Olowookere assured the team will get even better as the tournament progresses.

“We missed a number of chances again, but I like the spirit of the team and we will get better as we go on in the competition. I am happy we made it into the last eight, and that we sustained our winning mentality despite the fact that we only needed a draw to sail through.”