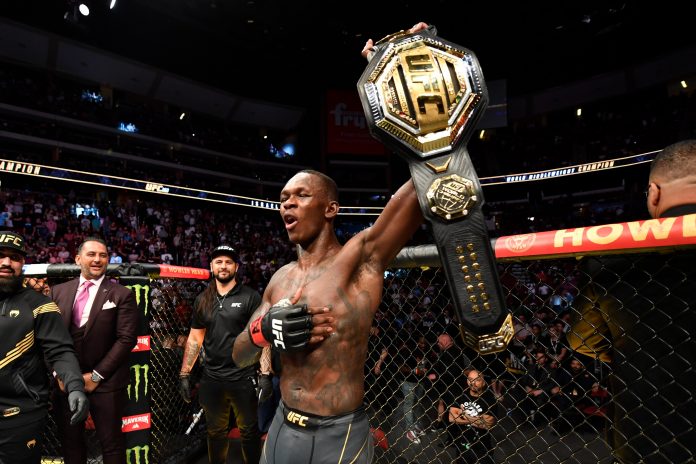 Israel Adesanya defeated Marvin Vettori in an unanimous decision at the end of round five to defend the UFC 263 Middleweight Belt on Sunday morning.

The Middleweight champion, Israel Adesanya, returned to a familiar place, the win column, against a familiar opponent, Marvin Vettori, in the pay-per-view (PPV) main event of UFC 263, which takes before a full crowd inside Gila River Arena in Glendale, Arizona.

Unsurprisingly, in the first round, there was no glove touch between the two sworn enemies. Marvin came out looking to push the pace and get the fight on his terms (the ground), while Adesanya chipped away at the legs and circled the cage. Adesanya went to the well one too many times early and Marvin caught a low kick and scored a quick takedown. He butt scooted to the cage and threw up a triangle that he turned into and escape. Back on their feet, Marvin tried to get him back to the ground, but Adesanya was able to slip out and get back to his feet. Marvin pumped jabs, but Adesanya’s head was already in another location by the time the shots arrived. Marvin tried to trap him along the cage, but Adesanya was able to dip and move, exiting out of danger and going to work with his kicks. He seemed to hurt Marvin, but the Italian put on a solid poker face and kept up the pressure. Adesanya ended the round with a solid shovel hook, but the takedown and control could mean that Marvin is up 1-0 on the judges scorecards.

Marvin continued the pressure to start the second stanza, but Adesanya was the one scoring with kicks and punches from all sorts of crazy angles. Overhand right from Marvin pushed Adesanya up against the cage, and moments later, he had Izzy up against the fence, looking for a takedown. Adesanya landed some hard elbows to the side of his head and Marvin gave up shortly afterward as the pair returned to the center of the cage. Marvin tried to pump the jab, but once again, came up with nothing but air. Low kick from Adesanya buckled Marvin, who continued to try and trap the champ along the fence. He wrapped his arms around him, but Adesanya plugged his ears with more elbows and he let him go. Marvin rushed in with a wild counter toward the end of the round, but Adesanya was the one who scored with a kick at the buzzer.

Judgment in Shell survey urgent interdict to be delivered on Friday

No Reports Of Deaths From Omicron Variant Yet, Says WHO