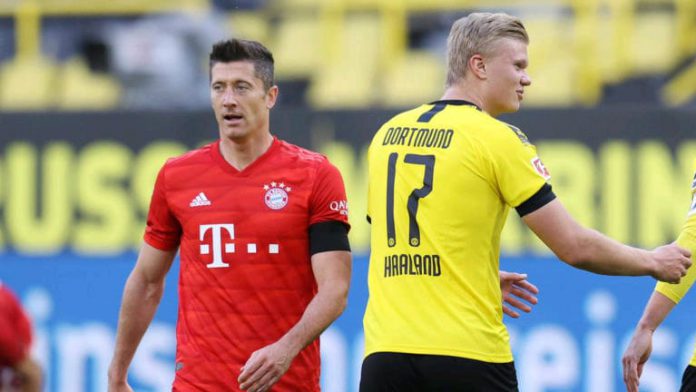 Robert Lewandowski has sent a reminder to Erling Haaland that he might not be a shoo-in for next year’s Best Striker award at the Ballon d’Or.

The Gerd Muller trophy is handed to the attacker who has impressed most over the last year and Monday was the second time Lewandowski had picked up the accolade. The Poland great netted 57 times last season in all, 50 of them for Bayern Munich.

The 34-year-old has scored 14 times in 13 outings for new club Barcelona this season, something that has largely been overlooked due to Haaland’s epic return for Manchester City.

The 22-year-old blanked against Liverpool in Sunday’s 1-0 defeat but has already hit 20 goals for the season, doing so in just 12 games. He is unsurprisingly being tipped for the Premier League golden boot and could well finish top scorer in Europe.

Chelsea hero Didier Drogba cheekily reminded Lewandowski of Haaland ’s amazing start to the season when the Barcelona star picked up his award during the ceremony, branding the Norwegian as “on fire”.

When asked if he was confident of winning the accolade next year amid Haaland’s form, Lewandowski replied: “The season is very long, I know it is a new chapter. From the first minute I see that with my teammates we have big potential and I will have the opportunity to score a lot of goals.”

The ultimate prize of the night was handed to Real Madrid’s Karim Benzema, who picked up his maiden Ballon d’Or after last season’s Champions League, La Liga and Super Cup triumph, during which he scored 44 times in 46 games.