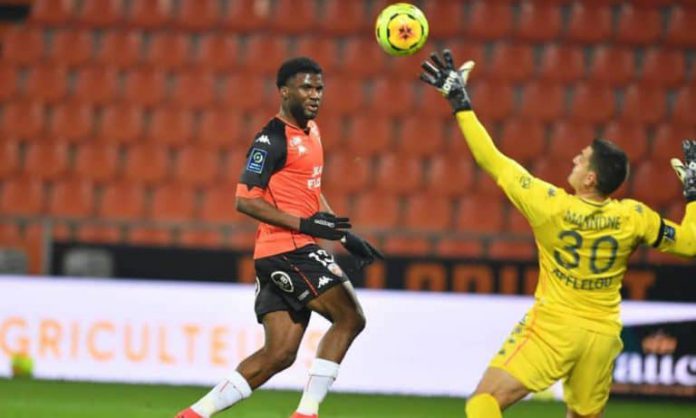 Monaco manager, Phillipe Clément, has revealed that he recognises Super Eagles’ forward, Terem Moffi, as one of the most dangerous attackers in the French Ligue 1.

Moffi failed to find the net as Lorient held Monaco to a 0-0 draw at the Stade Louis II in a matchday 24 clash on Sunday. But the 22-year-old’s quality is not in doubt after he smashed in 14 goals last year – his debut season in France.

The 2021-22 campaign has not been so kind to the former Kortrijk striker, as he has only managed three goals in 23 appearances for Lorient. Still, his pace and physicality make him a dangerous opponent to face for any defender.

And Monaco boss Clément thumbed up his defence for keeping the Nigerian and teammate Armand Laurienté quiet during their closely fought league clash.

“It’s always difficult to play against Lorient, who have proven this against Lens and PSG recently,” said Clément after the game, as per Ligue 1.

“We did well at times, and our ability to stop their counter-attacks was positive because, with Armand Laurienté and Terem Moffi, Lorient have players that can really hurt you.”

The point gained at Monaco lifted Lorient out of the relegation zone on goal difference, with Saint-Etienne, Metz, and Bordeaux now below Christophe Pélissier’s men on the league table.

Eskom ‘saboteurs are known’ and so is their purpose, says expert

I’m Ready To Be A Sweeper At The Presidential Villa If...

Why I Recalled Ighalo— Rohr