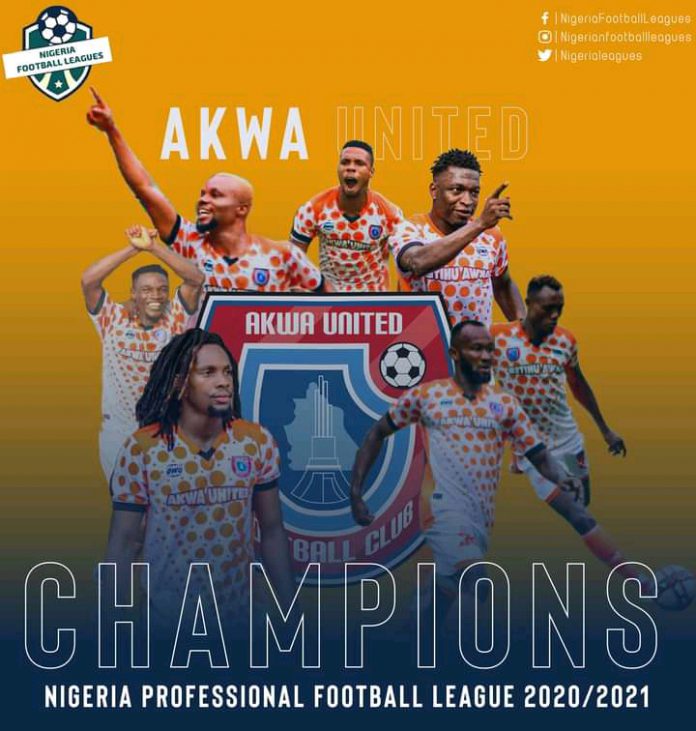 No doubt they were going to win the 2020/21 Nigeria Professional Football League season, they only had their reign delayed but on Sunday evening, Akwa United reign as the King of the league began.

The Promise Keepers delivered the league title to the people of Akwa Ibom State on Sunday evening when they defeated MFM FC of Lagos 5-1.

It was a lovely scene to behold at the near filled capacity Godswill Akpabio Stadium Uyo.

The fans were first thrown into wild jubilation when Charles Atshimene opened the scoring in the 24th minute before Alimi Adebayo of MFM FC scored an own goal in the in the 3rd minute of the additional time in the first half to give the Promise Keepers a comfortable lead going into the break.

The second half resumed with Akwa all over MFM FC and their pressure yielded another goal in the 62nd minute through Mfon Udoh. MFM FC reduced the deficit from the penalty spot in 68th minute through Mbonu.

Charles Atshimene restored Akwa’s three goals lead with his second of the game in the 87th minute and Obasi scored for MFM FC in the 90+1 minutes to yet again reduced the deficit to two.

It became an embarrassing result for MFM FC when they shipped in their fifth of the evening and it was the usual suspect of the evening, Charles Atshimene who scored. It was his third of the evening that puts him level on the scorer’s chat with Nasarawa United’s Silas Nwankwo.

It was indeed a beautiful scene from the Godswill Akpabio Stadium and it was a glorious celebration for Akwa United who won their first ever domestic league title.

Meanwhile Warri Wolves gave themselves survival hope when they defeated Heartland FC by a lone goal in Uzoro.

The win lift them to 17th on the log, level on points (41) with 16th placed Sunshine Stars who have played a game less.

Kastina United defeated Abia Warriors by a lone goal as well while Plateau United were 2-0 winners over Dakkada FC.

Histories were made on Sunday. Akwa United winning their first ever league title and their coach Kennedy Boboye became the first manager to win the NPFL twice in the LMC era.

The league continues on Monday with the battle for continental places set to intensify.

Nasarawa United will tackle Enugu Rangers at the Nasarawa Township Stadium, as Enyimba and Sunshine Stars lock ons in Aba.

It promises to be excited till the final day and with the champion already known, no doubt the fight for survival and continent will take the centre stage.

Anthony Joshua’s Rematch With Usyk To Hold In June