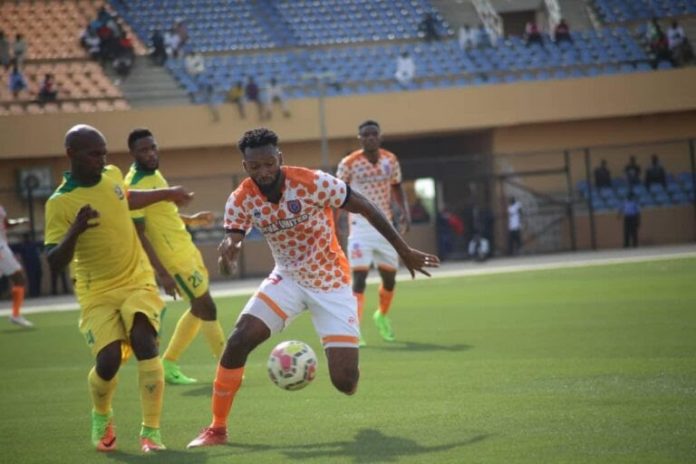 Kastina United halted Akwa United’s 18-games unbeaten run as they pipped them by a lone goal in the match day 29 encounter to open wide the title race.

The Promise Keepers who had enjoyed a run of 18 matches unbeaten, the longest ever in the history of the league in recent times could not overturned Kalu’s 15th minute penalty despite their surge for a leveller in the second half.

The defeat cuts their lead on top of the log to just a point as closest rivals, Nasarawa United and Kano Pillars won their games.

At the Lafia township stadium, Nasarawa United defeated Rivers United 2-0 to move within a point off Akwa United.

The Solid Miners have maintained some level of synergy between the squad which as kept them in contention for the top prize despite falling behind at some points.

Kano Pillars will have Odenigbo to thank for keeping them still in contention has his brilliant finish gave them a 1-0 win over FC Ifeanyi Ubah.

The Sai Masu Gida picked up themselves from a disappointing 1-0 loss to Jigawa Golden Stars last weekend to move level on points with second placed, Nasarawa United and within a point of leader’s Akwa United.

Kwara United continued their quest for a continental finish with a 1-0 win over Sunshine Stars of Akure, their first against them in over nine years.

Warri Wolves mysteries continues as they lose yet again at home, this time to Enugu Rangers by a lone goal.

Fidelis Ilechukwu’s Heartland did a double over MFM FC beating them 2-0 in Owerri.

The Happy One who in his recent interview with Sports journalists said he has nothing to prove against his former side masterminded a strong tactics to curtail the attacking fluid of the Olukoya Boys.

Although both sides got a red card in the encounter, it was more of a tactical than physical battle on the pitch.

Abia Warriors have now lost 3 games on the bounce, the most recent coming against Dakkada FC at home in Sunday evening.

The Imama Amakakabo’s led side have failed to find their scoring boots and also not keeping it tight at the back.

Free SHS needs to be reviewed to sustain it – Nortsu...