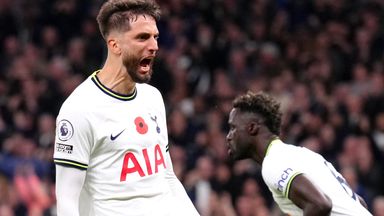 Bentancur fired Spurs level for the third time in the match via a wicked deflection off Luke Ayling, before tapping in Dejan Kulusevski’s low cross to earn Antonio Conte’s side all three points in dramatic fashion.

In a breathless first half, Crysencio Summerville’s fourth goal in as many top-flight games opened the scoring before Harry Kane rifled in an equaliser from close range.

In-form Rodrigo put Leeds ahead again, but Ben Davies snuck a shot beyond Illan Meslier and the retreating Rasmus Kristensen to restore parity for the second time.

Leeds’ misery was compounded when Tyler Adams was dismissed for a second bookable offence with three minutes remaining.

The victory consolidates Spurs’ place in the top four, while Leeds drop two places to 14th.