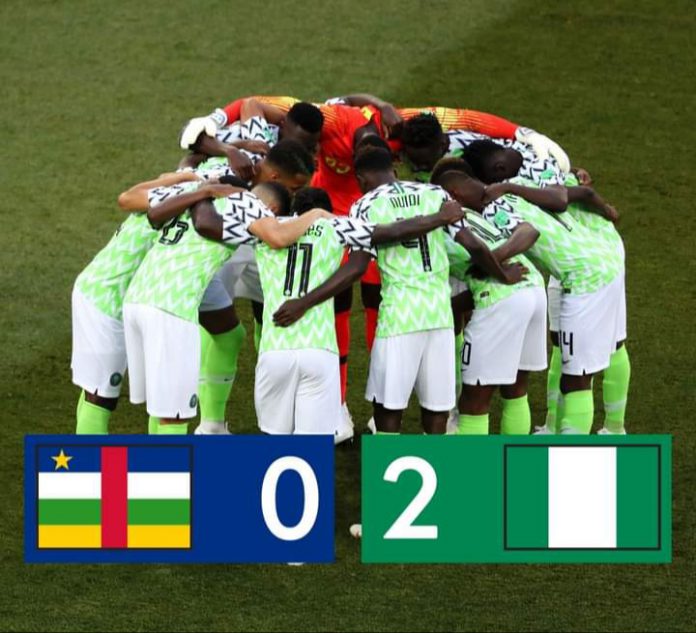 Leon Balogun’s first goal for Nigeria and a second Victor Osimhen goal in this qualifying campaign earned Nigeria a 2-0 win over the Central African Republic in Douala on Sunday and kept the Super Eagles in control of the pool with two matches to go.

The Les Fauves stunned the Eagles with a stoppage –time goal in the first leg in Lagos on Thursday to pick up the three points on offer, and assumed a lot of confidence even before the start inside the Stade Japoma de Douala on Sunday afternoon.

Yet, the Eagles had the first opportunity to take the lead in the very first minute, but Kelechi Iheanacho blasted over the bar from a free kick 20yards out.

Les Fauves adopted a hyper-aggressive stance, which earned them a couple of yellow cards before the half hour. In the 28th minute, as Nigeria launched another onslaught, defender Leon Balogun sneaked into the box and finished with aplomb when the ball was floated in from the right. Iheanacho again shot over the bar when well-placed in the 38th minute

Much credit must go to Captain Ahmed Musa, who won his 101st cap on the day, for invoking zest and urgency in the Nigeria team, and just before the blast of Rwandan referee Louis Hakizimana for half time, Victor Osimhen swept home beyond goalkeeper Prince Samolah for Nigeria’s second goal from a William Ekong cross.

In the second half, Musa’s cut-in for Osimhen was well-read by Captain Saint-cyr Ngam-Ngam. In the 57th minute, Osimhen should have made it 3-0 after lifting the ball beyond goalkeeper Samolah, but Sadock Ndobe cleared on the line.

Chidera Ejuke, who came in for Musa in the 66th minute, continued from where he left off in the Lagos match, turning, twisting, dribbling and getting past defenders at will, but luck was on the Les Fauves’ side the two times he broke through and came face-to-face with Samolah.

With four minutes left, Osimhen shot too high from another brilliant move and pass by Ejuke. But the day was theirs and the Eagles were good for the three points, which took them to nine, two ahead of second –placed Cape Verde, who scored in stoppage time to defeat Liberia’s Lone Star 1-0 in Mindelo.

At the end, Balogun said: “My first goal in seven years! I have been looking forward so much to it and I am happy it finally came, and on a day like this.”

On the flight back to Lagos aboard the Air Peace aircraft, the players celebrated Captain Musa who won his 101st cap on the day by standing round him as two other players held aloft a jersey signed by all his team mates.

Countries in Asia are placing orders for a new drug to...

Don’t allow your NIN to be linked to another person’s SIM...

Osimhen Fires Napoli To Top Of Serie A

Vardy starts for Leicester City but in-form Barnes on the bench...