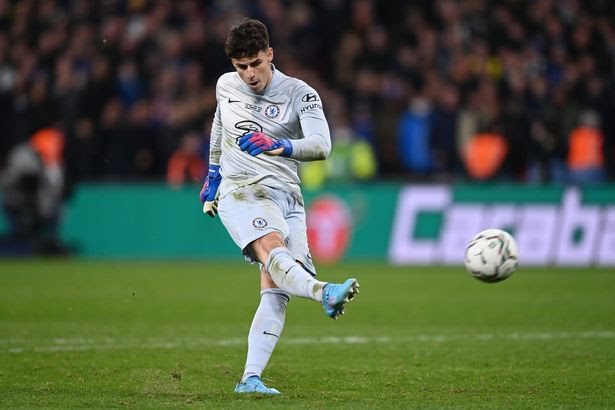 Spain stopper Kepa came off the bench in the closing stages of extra time specifically for the shoot-out, but would not have expected to step up to strike from the spot himself.

A stunning set of penalties left both keepers having to shoot at goal, however, and Kepa proved a luckless fall guy when blazing high over the bar.

Liverpool goalkeeper Caoimhin Kelleher had drilled a fine penalty into the net to heap the pressure on Kepa, and he came up just short at the very last.

‘Do you think we do this and don’t talk to the players? The players know the plan and we have done it before,’ said Tuchel.

‘If you want to blame somebody, blame me; this is not a problem.

‘I take the decisions and I don’t take them to try to be the hero. Today it took 11 penalties to find the winner. And if you want to blame anyone blame me, there’s no problem.’

Chelsea had subbed Kepa on for Edouard Mendy for the penalty shoot-out in the European Super Cup final against Villarreal in August.

And the switch paid off in Belfast as the Blues prevailed 6-5 at Windsor Park.

But the plan did not bear fruit at Wembley, as Jurgen Klopp secured his first domestic cup as Liverpool manager.

Chelsea boss Tuchel was at pains to stress that Kepa must not receive any criticism, amid a shoot-out where every other penalty proved close to flawless.

He said: ‘It is so bad for him of course, but no blame of course.

‘We took the decision like we did last time in a penalty shoot-out, because Kepa is training with the players on a daily basis.

‘They know how good he is and he simply has more time to do this than Edou (Mendy) on the training ground.

‘This plays a huge part in how good we shot today. Unfortunately he could not save any, the pens were brilliantly taken.

‘It was a bit harsh on him today to be the guy to miss the one and only penalty today but there’s no blame.

‘We cannot know what would have happened if we had left Edou on the pitch.

‘So of course if there’s any blame, it’s blame on me. I’m the guy to take the decisions, sometimes it works out and sometimes it does not.

Chelsea were left to rue three goals ruled out for offside amid a goalless 120 minutes.

Liverpool saw Joel Matip’s header chalked off for offside, but Kai Havertz had the ball in the back of the net twice and Romelu Lukaku also had an effort ruled out.

‘If you look at the line that’s drawn in the goal for Romelu, it’s a bit of a weird line to make the decision that it’s offside,’ said Tuchel.

‘But that’s it, we cannot have any regret, I’m very proud of the performance of the team. There’s a lot of good things and I told the guys we should not lose sleep about this.