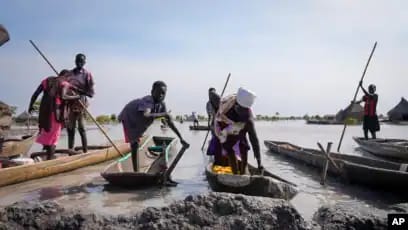 Meanwhile, South Sudan is dealing with the impact of four years of historic flooding.

According to the U.N. refugee agency, four years of record rains have flooded two-thirds of the country. It warned that the climate emergency displacing increasing numbers of people and making life harder for those already uprooted by the catastrophic rains.

UNHCR spokesman, Boris Cheshirkov stated that the worse is to come as the climate crisis accelerates.

“Over 900,000 people have been directly impacted. Waters have swept away homes and livestock, forced thousands to flee, and inundated large swathes of farmland, worsening an already dire food emergency. Boreholes and latrines have been submerged, contaminating water sources, and risking the outbreak of disease,” he said.

The U.N. Office for the Coordination of Humanitarian Affairs lamented that flooding has inundated nine of the country’s 10 states, including oil-rich Unity, Warrap, Upper Nile, and Jonglei states.

While the flooding is blocking aid delivery to those most in need, he said aid workers also are having a tough time reaching ethnic conflict areas.

“It is a cycle, which then promotes further displacement or makes it much more difficult for people because they have heightened protection needs. … Sexual exploitation and abuse, of course, this is one of the top priorities for our teams. It is to make sure that all the work that can be done to prevent and if there are cases to respond. But that is also one of the top priorities for us,” he said.