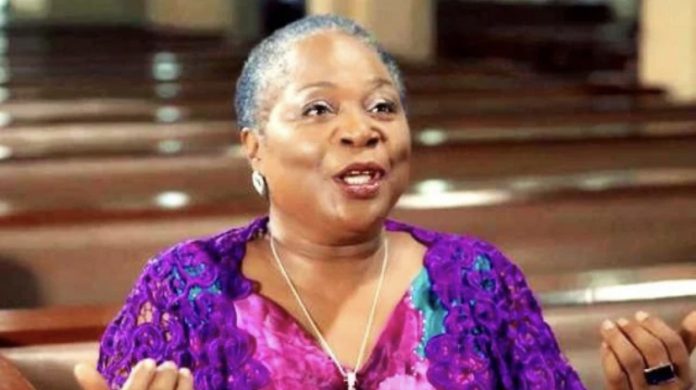 Nigerian singer and human rights activist, Onyeka Onwenu, has called out Obi Cubana, the Abuja-based business mogul, for staging a lavish burial in honour of his mother.

Obi has become a spread sensation since he buried his mother, who died in December last year.

The burial, which was held in Afor Uzo Oba, Anambra state weeks ago, has continued to generate mixed reactions, since then.

Onwenu has now described the burial as “obscene and insensitive.”

Onwenu said she is not against people spending their hard-earned money but such an open display of wealth at a time when many are grappling with poverty was “uncalled for”.

She also believes that Obi Cubana’s action contradicts the ideals of the Igbo culture.

“The point I make here is that there are different strokes for different folks, even within a family. I do not condemn anyone for how they mourn with their own hard-earned money, but I am very uncomfortable with the lavish display of wealth on any occasion, especially in a time of hardship and lack for most others,”

“The burial of Obi Cubana’s mother was not only lavish, it was obscene and insensitive. It sent all the wrong signals at a time when Nigeria is wracked with widespread poverty and lack.

“I condemn it all. It does not reflect the Igbo culture that I grew up in. Ndigbo would not condone the conspicuous display of wealth. If you were found doing that, your close and extended family, your community would send a delegation to you, to ask about your source of the wealth you are throwing about. You would be ostracized if you had no convincing evidence of legitimate work.”

Onwenu also slammed those criticising the entire southeast region because of the entrepreneur’s action, adding that such indicates the deep-seated hatred for the Igbo.

“…what I find equally deplorable in this whole debate, is the strenuous effort to tag the people of the Southeast, Ndigbo, with all manner of negative attributes because Obi Cubana is Igbo,” she added.

“This is not surprising. It has always been the case. When there is unexplainable hatred, some people are bound to give a dog a bad name so that they can justify hanging it.”

Onwenu disclosed that she had already informed her family not to throw such a lavish funeral for her when she passes away.

“I told a friend just days before the most outrageous burial of Innyom Ezinne Uche Iyiegbu in Oba, Anambra State in July that I had given my family instructions as to how to bury me when my time comes,”

“Do it quickly, quietly and privately. Celebrate me with prayers, lunch or dinner afterwards. Share some jokes about me and laugh. Mourn, yes but not excessively.

“Make merriment and then go about your business. If my friends want to celebrate me, they should do so while I am alive so that I can enjoy it with them, not when I am gone and have no idea.”