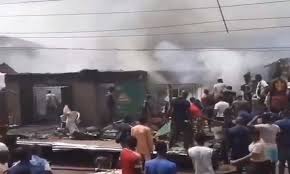 It was reported that a tanker was discharging fuel at the station in the Oluwole area of the town, Iseyin-Saki Road when there was a spark, which ignited the inferno.

Workers at the station and those in the neighborhood were said to have made frantic efforts to combat the fire before the arrival of the firemen.

Moshood Adewuyi, the Oyo State Chief Fire Officer said there was no death or injuries.

“The fire incident happened around 6 pm on Monday while a tanker was discharging its content. We thank God that it was just in the adjacent direction, about 400 meters away from the affected filling station. The canopy of the filling station and part of the office on the premises were torched,” he explained.

According to Metro Punch, goods estimated at millions of naira were destroyed after a fire gutted at least 30 shops at Shasha Market in Ibadan, the Oyo State capital.

The fire service chief, Adewuyi, said his men received a call to the incident around 4.25 am on Tuesday.

“About 30 shops were razed. We heard that the incident happened when electricity was restored in the area in the early hours of Tuesday. Shasha is a fruit and vegetable market, so the heaps of baskets that were kept at the place fuelled the fire,” he added.

He urged residents to be more careful to forestall fire incidents considering the fact that harmattan is gradually setting in.

In a related development, a midnight fire has reportedly razed the Katako Timber Market located in the Jos North Local Government Area of Plateau State.

According to residents, the fire, which started around 11.30 pm on Monday, lasted till Tuesday morning before it was put out by men of the state fire service.

PUNCH Metro gathered that it was the 28th time fire would ravage the market since it was opened some years ago.

“Before, they used to tell us that the fire was as a result of electrical faults. This time, we don’t know the cause because many people disconnected their electric wires from the timber market,” one of the traders, Yusufu Adamu, disclosed on Tuesday.

The Chairman of the Timber B Hausa Line in the market, Yusuf Buba, who also confirmed the incident, bemoaned that his members and other traders lost goods worth millions of naira to the fire.

He pleaded with the government to come to their aide.

The state Governor, Simon Lalong, who visited the market on Tuesday, promised to set up a committee to look into the root cause of constant fire incidents in the market.

Lalong, who was represented by the Chairman of Jos North LGA, Shehu Usman, said the committee when constituted, would work closely with officials of the market to find lasting solutions to the problem.

The governor promised that his administration would work with the business community to improve the socio-economic growth of the state by providing a conducive atmosphere for business to thrive.

Ministry of State in Charge of Human Rights and Relations with...