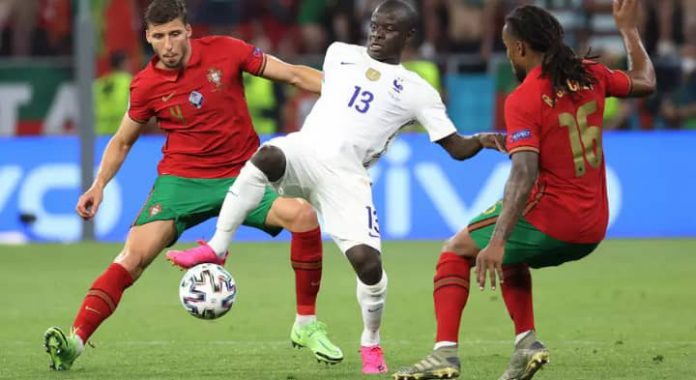 Leon Goretzka scored late to keep Germany in the European Championship after a 2-2 draw against Hungary on Wednesday.

Jamal Musiala made an immediate impact after coming on in the 82nd minute, eluding three defenders to give Timo Werner room to shoot. Werner, who also came on as a substitute, was blocked but the rebound fell for Goretzka, who shot past goalkeeper Péter Gulácsi in the 84th.

It had looked like Ádám Szalai was going to drag his team into the round of 16. The Hungary captain scored one goal early against the run of play and set up András Schäfer to make it 2-1 right after Kai Havertz had equalized for Germany.

Germany made the better start but was caught out early yet again in the tournament when Szalai met Roland Sallai’s cross with a flying header on a counterattack in the 11th.

Germany struggled against Hungary’s defensive 5-3-2 formation and was further hampered by heavy rain from a thundershower in the first half.

The home team also seemed to miss Thomas Müller’s unpredictability. Müller was on the bench because of a knee injury sustained in the 4-2 win over Portugal. Leroy Sané started in his place, the only change Joachim Löw made from the teams that started both previous games.

The home team had to wait till the 66th when the normally excellent Gulácsi failed to punch away Toni Koos’ free-kick. Mats Hummels headed the ball forward and Havertz made sure from close range.

Celebrations were cut short, however, as Hungary replied immediately when Szalai played in Schäfer to head the ball past Manuel Neuer.

It would have been enough to send Hungary through to the next round at Germany’s expense, but Löw’s substitutes rescued the game and kept him in a job. Löw is stepping down after the tournament.

Meanwhile, Cristiano Ronaldo kept Portugal alive in Euro 2020 with two penalties to cancel out a brace from France’s Karim Benzema in an enthralling 2-2 draw that sent both sides into the last 16 in a breathless conclusion to Group F on Wednesday.

Benzema confirmed his return from international exile with his first goals for France for more than five years after being recalled for the tournament.

But it was Ronaldo who again grabbed the headlines as he equalled the world record 109 international goals scored by Iran’s Ali Daei — ensuring that the defending European champions scrambled into the knockout phase.

Ronaldo tucked away the first of three penalties in the match in the 31st minute to give his side a deserved lead but Benzema equalised from the spot in first-half stoppage time.

Benzema struck again just after halftime from Paul Pogba’s superb pass and at that stage Portugal were heading out of the competition they won by beating France in 2016.

Ronaldo beat Hugo Lloris from the spot again on the hour, however, shortly before Pogba thumped a long-range effort against the crossbar in a match that sprung to life after a cagey start.

Portugal hung on the draw which meant they finished third in a heavyweight group with four points, behind Germany (four points) who twice came from behind to draw 2-2 with Hungary.

Juve to let Ronaldo leave if Portuguese forward wants out