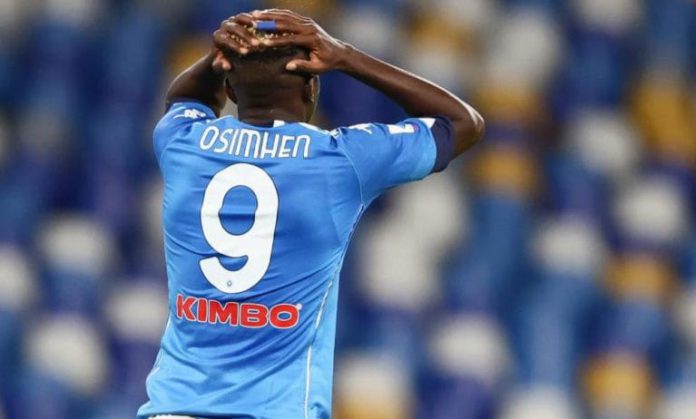 Napoli has rejected a ‘mega bid’ worth a staggering £76million from Arsenal for Victor Osimhen, according to sensational reports from Italy.

The prolific Nigerian frontman has worked his way onto Mikel Arteta and Edu’s striker shortlist but it appears the Gunners will have to smash their transfer record to land the highly-rated Super Eagles international.

Arsenal has long admired the 23-year-old, who is now recognised as one of the best young center-forwards in world football following his goalscoring exploits in Serie A.

The north London club previously considered a move for Osimhen during his time at Lille, while legendary boss Arsene Wenger also held talks with the player following the Under-17 World Cup way back in 2015, when Osimhen starred in attack for his country.

But a lot has changed since then, most notably Osimhen’s value with Napoli now set to demand a premium in order to agree to any sale this summer.

According to Italian outlet Calciomercato, the Serie A club has rejected an opening offer from Arsenal worth £76m (€90m) about N39 billion.

While there is no talk of a bid in the English press, Osimhen is certainly a name on Arsenal’s radar.

The Gunners are expected to spend excessively following the conclusion of the season, even if they miss out on Champions League football on the final day of the Premier League campaign.

Arsenal needs to beat Everton, whilst also hoping Norwich somehow pulls off a major scalp against Tottenham at Carrow Road in order to seal a return to Europe’s elite club competition.

Nonetheless, Edu and the Arsenal hierarchy are set to dig their hands deep into their pockets and back Arteta, who recently signed a contract extension.

At least two new strikers are on the agenda with Eddie Nketiah and Alexandre Lacazette now expected to leave Arsenal upon the expiry of their contracts in June.

In Photos: Discovering the Dazzling Art of Sham’adan Belly Dancing in...

Sakaja says he is cooperating with DCI on degree probe